"32 eggs, separated"; or, What Would We Do Without Baking Powder? 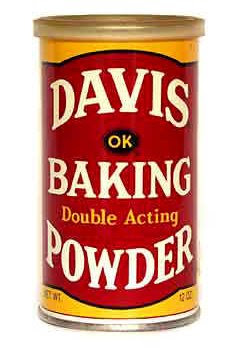 Thank god for KitchenAid mixers, I thought to myself as I read a wedding cake recipe in the early 19th-century Young Lady’s Companion. 4 pounds of flour (that’s somewhere between 12 and 16 cups to us Americans more used to cups than weights), 4 pounds of butter, and 2 pounds of sugar. But it’s the 32 eggs that got me. Imagine standing in the shoes of the hapless cook instructed to “work up the whites of your eggs to a very strong froth,” and “beat your yolks half an hour at least” before mixing them into the butter and sugar that you’ve already had to beat together “a quarter of an hour.” Visions of beefy forearms danced through my mind. As I said, thank god for KitchenAids. 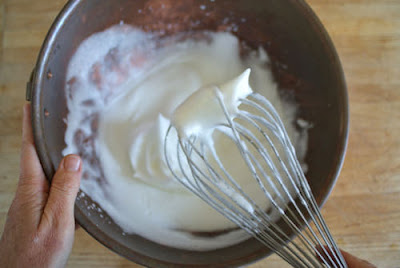 Or maybe the ones we should be thanking are the 19th century chemists who discovered the magic of chemical leavening, because without them, our cakes would still rise, but not nearly as quickly and certainly not as effortlessly as they do today. You would have had to leaven your cakes with yeast, but that would have taken a lot of time and have imparted a barminess, not wholly desirable. Or you would have beaten dozens upon dozens of egg whites into foamy submission, resulting in beautifully light and airy cakes, but also in those afore-mentioned beefy arms.

And then came baking powder—that indispensible household staple one reaches for today without thinking twice—and there was no looking back.

Of course people had known about soda for some time. “Soda” derives from sodium and it was sodium carbonate (for centuries, called “washing soda”) that Egyptians used to mummify their dead thousands of years ago. When sodium carbonate is combined with carbonic acid, sodium bicarbonate, or “baking soda,” is the result. And as anyone who’s ever added baking soda to vinegar knows, the combination of soda and acid is an explosive one; it’s that same explosivity—technically, the release of carbon dioxide—that causes your cake batters to rise. Baking powder, the next step in chemical leavening, added an acid (and some filler) right into the soda, so that bakers no longer had to worry whether the batter was acidic enough to activate the soda. The layers rose without fail every time. 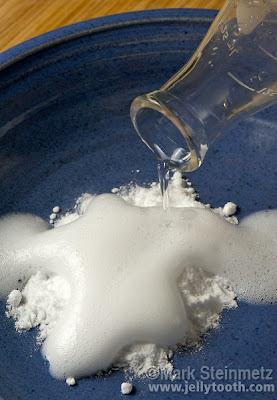 Another reason baking powder might have become popular so quickly is the obvious, immediate, and alarming gassiness that results when soda is combined with vinegar. Isabella Beeton, for one, expressed concern in her 1859 Book of Household Management: “A small pinch of carbonate of soda will give an extraordinary lightness to puff pastes . . . but its qualities have a powerful effect upon delicate constitutions, and it is not to be used incautiously in any preparation.”

Isn’t it lovely to learn that the first modern baking powder entered the world not out of any commercial zeal but out of a husband’s desire to please the “delicate constitution” of his highly allergic wife? Alfred Bird—yes, as in Bird’s Custard—loved his wife Elizabeth so much that he drew upon his chemical and pharmaceutical training to devise a way to leaven bread without yeast which she was unable to tolerate. She was similarly allergic to eggs, by the way, which is also why he concocted the corn-starch-thickened custard for which he is remembered today. Talk about true love. 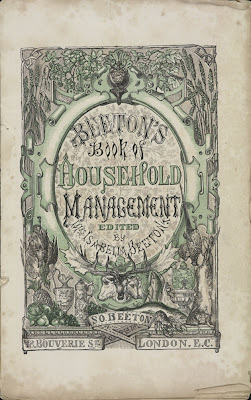 It didn’t take long for cookbooks to reflect the new discovery. Beeton’s “Nice Useful Cake,” for instance, calls for “2 teaspoonfuls of baking-powder” to leaven its batter. Granted, her cake is a much smaller affair than 32-egg wedding cake of earlier in the century, but if we apply the proportions of the earlier recipe to the later one, we’d still need eight eggs to lighten our batter. With a couple of teaspoons of baking powder, we’re down to a mere three, and even those, need be only briefly whisked, rather than separated and laboriously whipped.

So, take your pick. Is it KitchenAid standing mixers you want to thank for sparing you the beefy forearms of yore, or is it the unsung heroes of the chemistry lab?