My Introduction to Som Tam (or, Green Papaya Salad) 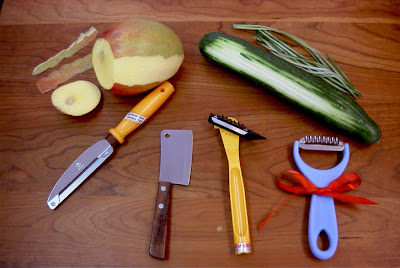 Toss the salad ingredients together in a large bowl. Mix the dressing ingredients together and pour over. Stir well. Garnish with chopped cilantro before serving.
[Note: traditionally, this salad is pounded together, ingredient by ingredient, in a mortar and pestle and no doubt there are many purists who insist the salad can be made in no other way. I’ve heard the same claimed of pesto sauce—that it doesn’t taste authentic unless the basic and garlic are pounded in a mortar and pestle. What can I say other than acknowledge that according to such purists, neither my pesto nor my som tam is authentic. Somehow, I can live with the shame.]


Epilogue: It turned out that the shouting concerned who owed or didn’t owe whom money. The apologetic & embarrassed owner didn’t want to charge us for the meal, but the food was so good, we insisted. Not only that, we’re going back for more.
Posted by Ina Lipkowitz at 3:53 PM