In Honor of Columbus Day If you’ve ever seen Frank Capra’s 1946 movie It’s A Wonderful Life, you’ll remember the scene when George Bailey, desperate to escape his creditors, wishes that he’d never been born. Miraculously his wish is granted and he’s given the profoundly unsettling opportunity to see what his hometown would be like had he never existed. To his shock and disbelief, nothing is as it should be. The most familiar sights had become strange.
I realize that most people associate this movie with Christmas when it’s all but impossible to avoid, but to me it’s got just as much to say to us about the holiday we’re celebrating today, Columbus Day. There’s a great analogy buried in there just waiting to be brought to light: as George Bailey was bewildered by his familiar-yet-strange hometown, so too would we be confused by the familiar-yet-strange state of the world’s food had Columbus never sailed the ocean blue. 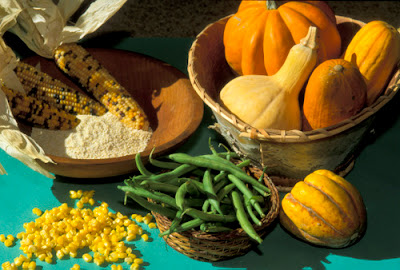 Just think about it. Potatoes, sweet potatoes, tomatoes, red, green and chili peppers, kidney and lima beans, corn, tapioca, vanilla, chocolate, peanuts, pecans, cashews, and the pièce de resistance of the Thanksgiving groaning board, the turkey—to name only a few (and that’s not including such other New World foods as the avocado, pineapple, mango, guava, papaya, grapefruit, jicama, Brazil and macadamia nuts, quinoa, wild rice, and quinine). Each and every one of these was “discovered” only after Columbus crossed the Atlantic, ostensibly in search of the East Indies. Logically, then, before 1492, the food the rest of the world ate must have looked and tasted very different.
For a moment, then, imagine yourself in George Bailey’s shoes, except instead of Bedford Falls, your hometown is our contemporary Global Village. Your guardian angel has just granted you a vision of the world at table had King Ferdinand and Queen Isabella never decided to fund Columbus’s voyage. (Of course someone else might have sailed across the ocean—it’s not called “The Age of Exploration” for nothing—but let’s suspend our disbelief for the sake of the analogy).
There’d still be pasta and pizza in Italy, but they’d lack their familiar blanket of tomato sauce. There’d still be polenta as well—not to mention mămăligă, the national dish of Romania—but they’d be made out of such grains as millet or chestnut flour as they had been for centuries before cornmeal eclipsed everything else. The countries of the Vodka Belt would still be drinking their favorite spirit, but it wouldn’t be distilled from potatoes or corn. There’d be no peanuts in Indonesian satays, no chili peppers in Indian curries, no paprika in Hungarian paprikash, and no vanilla beans in Madagascar. There’d be no butternut squash in the tagines of Morocco, no haricot verts to be blanched and tossed in butter and French tarragon, no cashews in Szechuan stir-fries, and, since there’d be no quinine, there’d be no gin and tonics at all. Nor would there be chocolate mousse, Belgian chocolate, Black Forest cake, or Sachertorte. In fact, there’d be no chocolate whatsoever. That’s right: absolutely no chocolate.
Every schoolchild knows that Columbus “discovered America” and proved to the world the earth was round (although in truth people had known this for centuries already). Why aren’t they taught what, to my mind, was his far more momentous contribution to world history: the introduction of such a wealth of new foods to the rest of the world?
In honor of the day named after him, then, wouldn’t it be appropriate for the Global Village to celebrate with a meal comprised of nothing but New World ingredients? It could begin with a butternut squash soup and slices of molasses cornbread. A roast turkey could follow, accompanied by mashed potatoes, string beans, and cranberry sauce. For dessert, a trio of pies—sweet potato, pumpkin, and pecan—and, of course, something decadently chocolate.
Oh wait, that’s Thanksgiving, the holiday commemorating the Pilgrims having survived their first year in the New World.
Let’s try again. How about instead of an all-American meal, we celebrate Columbus Day with a truly global meal, a meal that represents the marriage of Old and New? How about starting with that wonderful Italian tomato and bread soup, pappa al pomodoro, which simply couldn’t be without the tomatoes indigenous to Peru? How about a nice and spicy Vindaloo, that fiery specialty of the Goan region of India, colonized by the Portuguese who’d brought with them the chili peppers they’d discovered in Mexico—the chili peppers that were to forever transform the cuisine of the subcontinent. On the other hand, who could object to a Mafé, one of the most popular dishes of sub-Saharan Africa, in which chunks of whatever meat you like (chicken, lamb, beef, or even fish) are stewed in a sauce that features a trinity of New World ingredients: tomatoes, peanuts, and chili peppers? 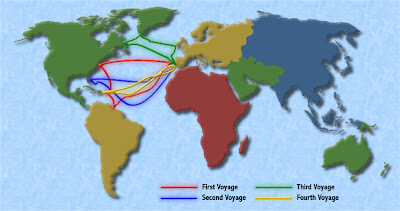 For dessert, it’s got to be chocolate. My personal vote goes for a Sachertorte, that unforgettable Viennese confection invented by Franz Sacher in the early nineteenth century: layers of dense not-too-sweet chocolate cake are sandwiched together with apricot jam and then coated with dark chocolate. Traditionally served with whipped cream, it would be an unforgettable ending to our truly global meal. Those of you with more of a sweet tooth than I’ve got would have no cause to complain when served a scoop or two of Madagascar vanilla bean ice cream dripping with a Belgian chocolate sauce.
NB: Anyone who knows anything Spanish and Portuguese colonialism in the New World knows that I’ve completely omitted discussion of one of the most important new foods of all: cane sugar grown on the plantations in Cuba and Hispaniola. The subject is a fascinating and enormous one that an old friend of mine has been urging me to write about. Jon, I promise: one day soon!
Posted by Ina Lipkowitz at 8:23 AM