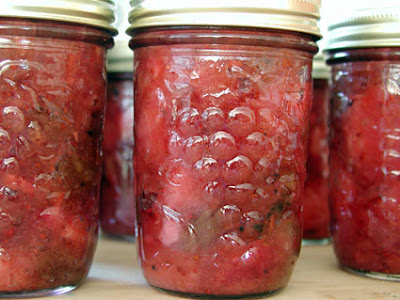 An unexpectedly quiet evening. A bumper crop of apples from a visit to an orchard earlier in the week. A bag of cranberries in the freezer since last Thanksgiving. I don’t know about you, but to me, a spare hour or two plus apples and cranberries equals chutney. Yes, I know that might not be your very first thought, but you see I’d already treated my family to an apple-cranberry crisp the evening before—which they devoured in record time—and I figured I’d vary things up with something savory. The beauty of chutney is that, apart from its starring fruit or vegetable, it’s made out of ingredients you tend to have on hand, it doesn’t take all that long to whip together, and people are unduly impressed when you serve up (or better yet, present them with a gift of) what they imagine must have taken the better part of a weekend to produce.
Within ten minutes, I’d peeled and chopped up my apples and had them happily simmering away on the stove with the cranberries (straight out of the freezer), some brown sugar and raisins for sweetness, some onion, ginger, and vinegar for tang, and a sprinkle of curry powder for a little warmth. Twenty minutes later, the various bits and pieces had magically transformed themselves into a ruby-colored, exotically-scented sludge of a paste that I let cool before spooning into jars which I then stashed in the nether regions of my refrigerator where no one ever looks. And there my chutney will remain, quietly mellowing and maturing until Thanksgiving rolls around, when its jewel-toned piquancy will shimmer all the more alluringly alongside the turkey, mashed potatoes, and gravy—each and every one delicious, but not, as far as appearance is concerned, particularly attractive.
When I was a girl, the only chutney I knew was Major Grey’s Mango, which my mother always had a jar of on the door of the refrigerator. I don’t remember any of us ever actually eating it, though; she used to serve it with cheese and minced scallions as a fancy hors-d’oeuvre when company came over. It was when I went off to college in New York City that I discovered the wonderful world of spicy chutneys. I used to take the subway down to St. Mark’s Place and meander my way into one of any number of inexpensive Indian restaurants where you could dine like a rajah or rani for about $10.00 a person (admittedly, this was quite a few years ago). The moment you sat down, you were given a plate of crispy pappadum and a trio of chutneys, invariably including a spicy green one (whether coriander, chili, or mint), a tangy brownish-purple tamarind one, and burnished-red minced onion in cayenne. 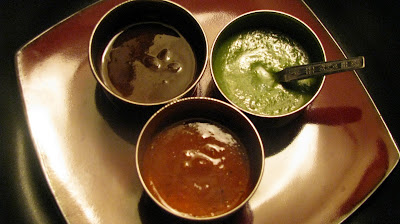 At some point while I was eating my way through the gallons of chutney I consumed during my hundreds of visits to St. Marks Place, it dawned on me that the chutneys in Indian restaurants had very little in common with the Major Grey’s Mango in my mother’s refrigerator. At some point later, when I had a fully functioning kitchen of my own and had developed a fondness for producing jams, pickles, and chutneys, it occurred to me that my obviously Americanized apple and cranberry chutney was different still (they don’t have cranberries in India, after all!). What have they got in common other than the fact that they all consist of chopped up bits of fruits, herbs, and vegetables—which, by the way, is what the word sort-of means: it’s from the Hindi chatni— and ultimately from the Sanskrit catni—which means, simply, “to crush.”
It was Julie Sahni, author of Classic Indian Cooking, who finally set me straight. There are three types of popular relishes—or chutneys—she explains in her Classic Indian Cooking: chopped vegetable relishes (like the cayenne-sprinkled onion one); fresh herb pastes (like the chili, coriander and mint ones), and preserved relishes made by cooking cut-up pulpy fruits like apples, pears, tamarind, or mangoes, with sugar, vinegar and spices (like my mother’s Major Grey Chutney and the apple-cranberry one I cooked up the other night).
Then I happened to read David Burton’s wonderful The Raj at Table: A Culinary History of the British in India, which begins with a telling exchange of parting gifts, so to speak. Although British rule over India officially ended in 1947, the subcontinent held onto quite a number of specifically English institutions, including the parliamentary, legal, and railway systems, not to mention the language itself. What was not kept, unsurprisingly, was English food. On the other hand, when the English departed, after some hundreds of years in India they took very little with them. A few words perhaps—like bungalow, dinghy, jodhpur, jungle, pajamas, and shampoo. Mostly what they took was the food. Whether or not there really was an officer in the Bengal Lancers named Major Grey is a subject of much contention, but no one can deny the enduring popularity of the chutney that bears his name. It’s even inspired a little ditty:
All things chickeney and mutt’ny
Taste better far when served with chutney.
This is the mystery eternal:
Why didn’t Major Grey make colo-nel? 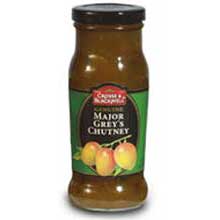 If the Brits got away with it, I figure, why can’t I? And so I give to you my recipe for an entirely inauthentic but very delicious American chutney. Make it today. Before you know it, it’ll be Thanksgiving.
Apple-Cranberry Chutney
3 cups whole cranberries (fresh or frozen)
4-5 apples, peeled, cored, and chopped
1 cup light or dark brown sugar
½ cup raisins (light or dark)
¼ cup minced fresh ginger
1 cup chopped onion
¼ cup vinegar (I used cider vinegar, but other fruit ones would be nice too)
pinch curry powder
grated zest of 1 lemon
Mix everything up in a large pot, bring to a boil, reduce heat, and let simmer for about 20 minutes, stirring often, until the mixture is thickened. Let cool, spoon into jars, and refrigerate. Of course you can eat this right away, but it’s a lot better if you wait a few weeks. This is also great, by the way, with pears instead of (or even in addition to) the apples.
Posted by Ina Lipkowitz at 9:19 AM