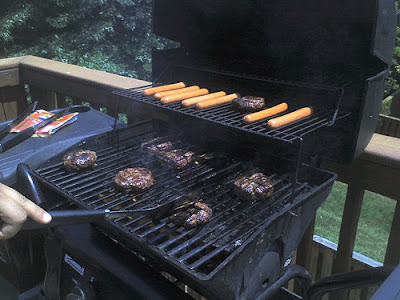 Some food for thought as you flip those burgers and dogs on this long holiday weekend that, apart from commemorating our nation’s veterans, also marks the (un)official start of summer, season of backyard barbeques.
Imagine walking up to the counter at your local McDonald’s, gazing up at the menu, and placing your order: “I’ll have a liberty steak and a large freedom fries.” A hundred to one, you’d be met with a blank stare and a “What?” Yet time was when ordering a hamburger would have been regarded as downright unpatriotic—it’s German, after all—and it was only a few short years ago that French fries appeared under the moniker “freedom fries” in response to France’s opposition to the US invasion of Iraq.  (For the same reason, by the way, French toast briefly became freedom toast, and even the makers of French’s mustard felt compelled to release a statement clarifying that their product had been named after its founder, Robert T. French. “The only thing about French about French’s Mustard is the name,” their statement insisted).

Puts our national obsession with the burger in a whole new perspective. You mean that those millions and millions of ground beef patties aren’t so very American after all? Well, they are hamburgers, which, despite what some people seem to believe, have nothing whatsoever to do with ham, but instead owe their name to the German port city Hamburg. Frankfurters, for that matter, similarly trace back to Frankfurt, where porky sausages are known as Frankfurter Würstchen—German for “little sausages from Frankfurt”).

When anti-German sentiment was at fever pitch during World War I, true-blue Americans were faced with the dilemma of either giving up their hamburgers or being suspected of sympathizing with the enemy. The solution? Simple. A quick name change. After all, as Juliet said to her Romeo, “What’s in a name?” By her logic, that which we call a hamburger, by any other name would taste as good. Thus, “liberty steak.” Thus, “Salisbury steak.” It took the post-war Billy Ingram, inventor of White Castle’s five-cent 2 ½-inch square “slider” in 1921 to elevate the hamburger-qua-hamburger to the popularity it enjoys to this day. 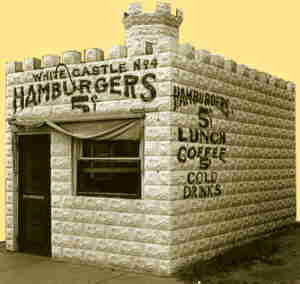 I’d love to be able to say that hot dog arose similarly, as an all-American replacement for frankfurter or for the equally Teutonic Wiener (from Wien, the German spelling of Vienna), but, in all honesty, I cannot. Nor can anyone else. If I had a dollar for every theory I’ve read about where the name comes from, I’d be rich.
Perhaps it was the visual pun of newspaper cartoonist Thomas Aloysius “TAD” Dorgan who drew the image conjured by a hawker’s cry at a New York Giants baseball game in 1900: “Get a red-hot dachshund sausage in a roll!” (Others argue the venue was a bicycle race at Madison Square Garden in 1906). 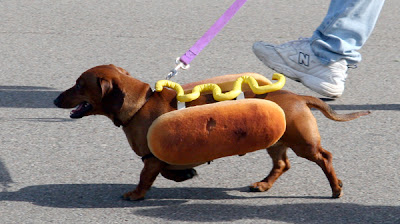 On the other hand, perhaps the name reflects early suspicions that it wasn’t beef or pork the sausage makers were using—hence, the lyrics of the 19th-century “Oh where, oh where is my little dog gone.” Most of you remember the song’s plaintive lyrics about a cute little lost dog “with his ears so short and his tail so long,” but the rest of the song isn’t nearly as sweet. Written to the melody of a German folk tune, “Der Deitcher’s Dog” bemoans the lack of money—and hence the lack of beer and sausages—and ends by speculating on the fate of the little lost dog:
Un sausage is goot, bolonie of course,
Oh where, oh where can he be;
Dey makes 'em mit dog und dey makes 'em mit horse,
I guess they makes 'em mit he.
Posted by Ina Lipkowitz at 10:49 AM