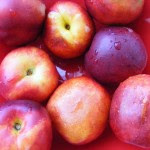 Pity the poor nectarine. Talk about your inferiority complex: "A peach without the fuzz." "A cross between a peach and a plum.” Never its own identity, yet as far as nomenclature is concerned, the nectarine stands alone. The peach and plum can’t hope to compete. The peach owes its name to no more than a mistake. Believing it to have hailed from Persia, the Romans named it a malum persicum, or “Persian apple,” which, as the years rolled by, was shortened to persica, from which Italian derived its pesca, French its pêche, and English its peach. The plum derives its name more matter-of-factly from the Latin prunum.
Only the woefully misunderstood nectarine owes its name to the drink that both slaked the thirst of the ancient Greek gods and insured them their immortality. Who would have guessed that nec- comes from the Greek word for death (think necrophilia and necromancy) or that tar comes from a verb that meant “to overcome”? The next time you bite into the smooth-skinned yellowy-orange drupe (as the botanists like to refer to single-stoned fruits) and feel its sticky sweet syrup dripping down your chin, you can envision yourself lolling for all eternity with Zeus, Hera, and the rest of them up there on Mount Olympus. 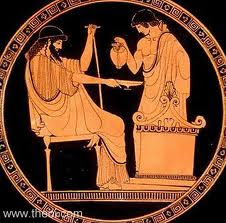 But did you ever wonder how the fruit got such a mythical name? Because I’m the sort of person who does wonder about such things, I’ll share with you the fruits of my research (I just couldn’t avoid the pun).
It turns out that it doesn’t have its beautifully evocative name everywhere. In Italy, it’s called a pesca-noce (or a noce-pesca), which may sound lyrical yet means no more than “nut-peach” or perhaps “peach with a nut” (presumably the nut in question is the pit, but don’t peaches have stones too?). In France, it’s a brugnon, named after the city in Provençe today called Brignoles, famous for its plums and smooth-skinned peaches since the days of the ancient Romans. Apparently, there’s nothing particularly poetic or mythic about the fruit when it’s eaten by people who can pluck it from a tree any old time they want to.

In Germany, on the other hand, where not a whole lot of fruit grows easily, it’s called a Nektarpfirsich, or “nectar peach.” Now we’re getting warmer. It’s unclear whether the English borrowed the word from the Germans in the seventeenth century or whether they adapted it from their own now-obsolete adjective “nectarine” which used to mean, not surprisingly, “sweet as nectar.” In either case, what a sea-change the fruit went through went it traveled up north! Can’t you just hear the yearning of the fruit-deprived people of northern Europe who so treasured their nectarines that they bestowed on them the name of the elixir of immortality of the ancient Greek pantheon.
The next time you find yourself with a nectarine in your hand, take a second look and see it for what it really is: the fruit of immortality. At the very least, savor its summery nectar.
Posted by Ina Lipkowitz at 5:47 PM