My Daughter the Dairymaid 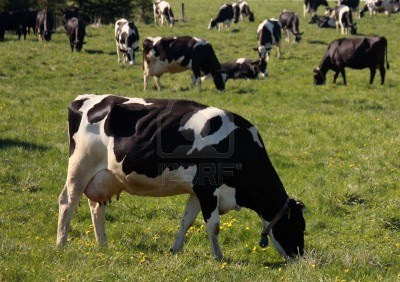 Go figure. My daughter decided to spend her last summer before leaving for college in New York City working on a dairy farm in northern Vermont, and, doting mother that I am, I have just returned from a visit up to the land of cows, hay bales, and maple syrup. It’s quite a feeling to wake up at 5:30 in the morning and make your bleary way to a barn where some 40 Holsteins stand, patiently (or not) waiting to be milked. As my daughter, in her dirty jeans and muddy wellies, got to work cleaning teats and attaching what to my eyes looked like a four-limbed metal octopus to almost unbelievably massive udders, I, in typical fashion, got to pondering. The longer she milked, the more my mind wandered, its meanderings accompanied by the hypnotic whooshing of the milking machine, the gentle lowing of the cows, and the sweet grassy smell of new mown hay. 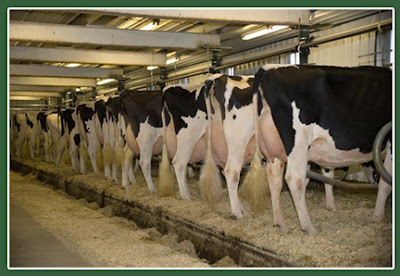 What is it about dairies, I wondered, that exerts such a fascination over me? Is it that I’m forced to acknowledge that milk doesn’t, after all, begin life as a fat-free homogenized pasteurized tasteless liquid in a plastic jug container—not to mention the fact that it certainly wasn't intended to be drunk by the likes of us? Step one foot into the dairy and you know beyond the shadow of a doubt that nature meant milk to be drunk warm and full of fat.
Or is something less practical responsible for my fascination?
Is it that, literary type that I am, novel after novel comes to mind, first and foremost Thomas Hardy’s Tess of the D’Urbervilles with its description of the “large-veined udders [that] hung ponderous as sandbags, the teats sticking out like the legs of a gipsy’s crock”? 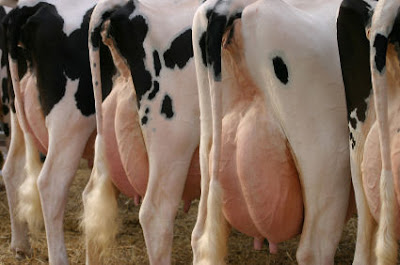 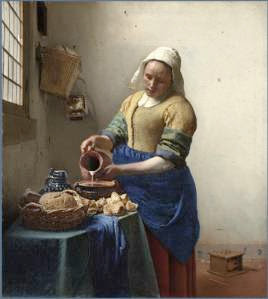 It’s no accident that dairies have traditionally been tended by milkmaids, whether in life or art. In fact there’s even more of a connection between the two than meets the eye. The first syllable of dairy comes from an Old English word dæge which meant “female servant” or “housekeeper.” More literally still, it meant “kneader of bread”—it’s from dæge that we also get our word dough. Obviously it fell to the female servants to both knead the dough and milk the cows. The last syllable of our “lady,” by the way, comes from that same Old English dæge, which means that no matter how refined the lady, there’s still a bit of the dairy in her.
But make no mistake. The milkmaid of yore did not have a lady-like life. As an 18th century farming treatise noted, “she may be known by her red plump arms and hands and clumsy fingers: for in most great farms they are forced to milk their cows abroad, a great part of the year; I may say, almost all the year even in frosts and snows, while their fingers are ready to freeze in the action: and sometimes while they stand in dirt and water, and indeed, it may be justly said of these, that their work is never done.”
And so my thoughts wander as my daughter patiently makes her way down the line of cows, each one collapsing into a ponderous mass of flesh and bone after having been milked. From a cow's perspective, milking is as exhausting a business as it was to the milkmaids of a pre-industrial age.  All things considered, even with milking machines and automated round hay bale feeders, my daughter’s likely to find life easier come September when she heads off to college. At least her arms and hands will.
Posted by Ina Lipkowitz at 2:01 PM