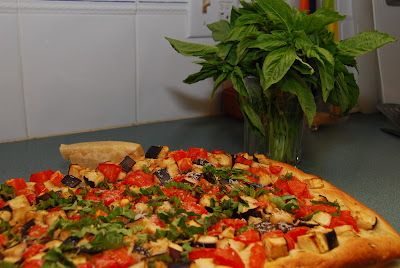 A quick post for a summer’s day. Quick because it’s finally not too hazy, hot, and humid to be outside. To go for a bike ride, spend the day at the beach, or even just to take a walk without feeling that one is melting. Beautiful as the day is, though, I know that the dinner hour will come and everyone will want to eat. But I’ll have been out enjoying myself and ordering in for pizza just doesn’t do it for me on a day like this.
It’s funny how some people can spend an afternoon at the beach, roasting themselves in the sun until their skin turns roast-turkey-burnished-brown and then go out for a slice of pizza. I don’t get it. Oily cheese, oreganoey tomato sauce, and pepperoni do nothing for me after a day in the hot sun. Even a perfect summer day like this one doesn’t find me wanting pizza—not sauce-laden American-style pizzas, that is.
But a focaccia? Now you’re talking. For those of you less familiar with focaccia than you are with pizza, here’s Carol Field, author of The Italian Baker, on the subject, which she claims “has become a national dish”: “Focacce [the plural form of the word] are simplicity itself; herbs of the countryside and the golden oils of Liguria flavor the interior, while a little local garlic or tiny savory olives stud its surface. In Puglia a variety called puddica is enriched with the ingredients of a pastoral people—tomatoes, garlic, oregano, capers, and oil.” How good does that sound? 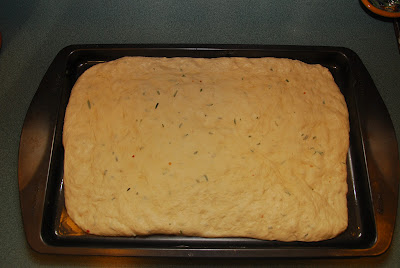 Its very name indicates how central (I couldn’t resist the pun) focaccia has been throughout the history of Italy. It comes to us from the Latin focus, which meant “center,” “hearth” or “fireplace” (they amount to the same, the hearth or fireplace being the traditional center of the house). And the flat bread was indeed baked in the ashes of the fireplace. It’s even been claimed that focaccia is “pre-pizza.”
One can debate which came first. One can point out that focaccia is more popular in the north of Italy while pizza reigns supreme in the south. One can try to distinguish between the two on the basis of dough thickness; on whether olive oil and fresh herbs are incorporated into the dough or drizzled and sprinkled on top; or on whether it’s got toppings or not. But there’s one thing I’m not going to debate. 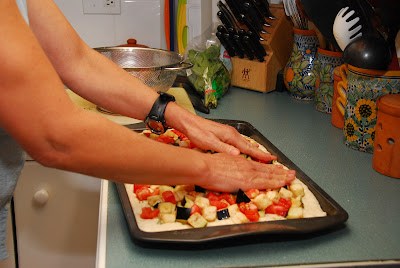 On a beautiful summer’s day, a home-baked olive oil and rosemary focaccia with local tomatoes and basil is the perfect dinner.
This morning I made a focaccia dough which is slowly rising in the refrigerator. When I get back, I won’t even bother to roll it out. I’ll just press it into a large rectangle, dimple its surface with my fingertips, sprinkle it with some coarse salt, chopped rosemary, and some chopped tomatoes—maybe even a diced up eggplant. And then I’ll bake it, not in the ashes of my fireplace, but in the oven (I haven’t yet tried to do so, but I know that some people grill their focacce). With some fresh basil strewed about, my focaccia will hit a spot that pizza never would have. 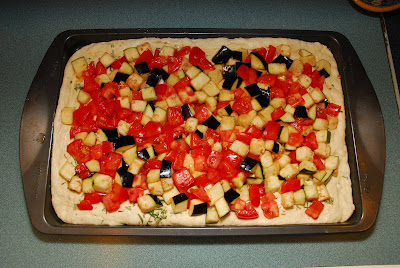 For the garlic oil: heat the oil, garlic, and red pepper in a small saucepan for 5-10 minutes, until the garlic is golden. Remove from the heat & let stand, covered, for an hour. You can make this way ahead of time and store it in a jar in the fridge.

For the dough: dissolve the yeast & sugar in the water & let stand until foamy. Add 3 tbsp of the garlic oil. Combine 2 cups flour & 2 tsp salt in the bowl of a mixer. Add the yeast mixture and rosemary and beat until incorporated. Add remaining flour, a cup at a time, until the dough is smooth & soft, just barely sticking to the bowl. Brush large bowl with a bit of garlic oil, and transfer the dough to the bowl, turning to coat. Cover with plastic wrap & either let rise on the counter for an hour or so, or slowly in the refrigerator, until double in bulk.

About an hour before eating, chop the tomatoes and toss with 1 tbsp coarse salt in a colander set over the sink, allowing the liquid to drain off. Punch down the dough and transfer to a 10 x 15 baking sheet that’s been brushed with about a tablespoon of garlic oil. Using oiled fingers, stretch the dough to shape and then dimple the surface with your fingertips. Sprinkle with rosemary & tomatoes (& eggplant, if using), pressing gently into the dough. Sprinkle with salt & bake at 450 for about 30 minutes. Transfer to rack, sprinkle with basil and grate as much parmesan as you like over the top. Let cool just a bit, cut into squares, and serve.
(Note: With special thanks to Dylan Epstein for his photography!) 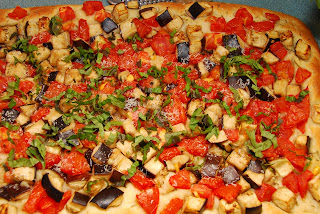