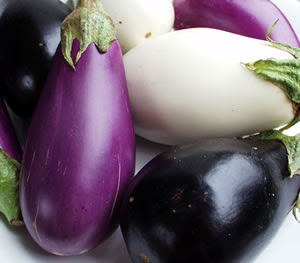 Two proverbs for today. The first is attributed to Winston Churchill. “England and America are two countries separated by a common language."

The second is a traditional Arabic proverb: “A woman who does not know how to prepare eggplant 101 different ways is not yet prepared for marriage.”
Put them together and what do you have? English and American brides-to-be who can’t even decide what to call the vegetable, much less come up with 101 ways to cook it.

Is it an eggplant, as we North Americans like to call it, or an aubergine, as those other English speakers refer to it?
Let’s start with eggplant, since I’m on this side of the Atlantic. It’s a curious name, especially if your default is the large purple variety rather than the smaller white one described in a sixteenth-century Herball, or General Historie of Plants as having “the bignesse of a Swans egge” and which obviously gave the entire species the name we know it by today here in North America. 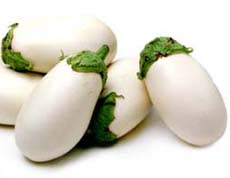 On the other side of the Atlantic, though, they’re aubergines, which to many Americans might sound more like a shade of nail polish or lipstick than it does something to be cooked for dinner, but the British have long had a penchant for referring to their vegetables by French names. What we call zucchini, they call courgette. Our snow pea is their mangetout. What we know as arugula, they know as rocket, often spelled roquette. (For more on American vs. British vegetable names—not to mention many other instance of our separation by a common language—check out the wonderful blog called, aptly enough, separated by a common language.)
For reasons unknown, North Americans never cozied up to aubergine and I, for one, am glad. I like that the vegetable I cook so often for dinner should have such a funny made-up name, dating only to the 18th century, when someone had the bright idea to put two everyday words together to describe the small white variety. That someone was not, as might be expected, an American, but the English John Abercrombie, author of the 1767 Every Man His Own Gardener. For some reason, however, his neologism took root in the United States rather than in his native country.
I will admit, though, that aubergine wins out in the history-and-circuitous-meanderings-through-ancient-lands-and-languages department. In Sanskrit, it was a vatinganah (which meant, rather unappetizingly, “anti-wind vegetable”), later naturalized by the Persian Empire as badingan. When the Persians conquered Arabia, they brought their badingans with them, where they acquired the Arabic definite article al and were henceforth known as al-badhinjan. When the Arabs, in turn, invaded the Iberian peninsula, their eggplants were soon mispronounced by the Spaniards as berengena. Up in the northern region of Catalonia, the dialect name was an alberginia, which the neighboring French transformed into aubergine, and it is from them that the British appropriated their name for the vegetable. 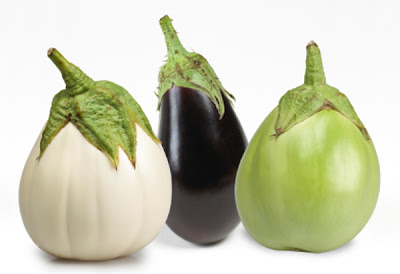 When it wasn’t being compared to a swan egg, the eggplant was sometimes called a “a Madde or Raging Apple”—probably because it belongs to the deadly nightshade family, which also includes the tomato and potato, by the way. Folk wisdom held that the eggplant would make the eater go mad; hence, “madde apple.” It’s even possible, though not all linguists agree on this, that the Italian name for the vegetable, melanzana, derives from the Latin words mala and insana, in which case, translated literally from the Italian, an eggplant would be an “apple of insanity.” 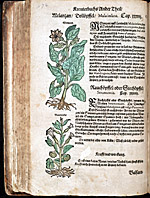 Here in the United States, however, eggplants have no such psychiatric history but have been plain Jane eggplants, at least since Thomas Jefferson, not only our third president but also a passionate gardener, bemoaned that “I lost by the drought my egg plants” in his 1807 Garden Book and Mary Randolph provided the very first all-American recipes for them in her 1824 The Virginia Housewife, titled, quite simply, “Egg Plant.”
Now for 101 ways to cook it, whether you call it eggplant or aubergine. There’s grilled eggplant slices and baba ghanoush. There’s moussaka and my favorite Szechuan eggplant, spicy with chili paste and garlic (recipe below). There’s caponata, the Sicilian sweet and sour spread of eggplant, tomatoes, olives, and capers, and there’s late-summer Provençale ratatouille. There’s eggplant cooked with a Bengali mixture of cumin, fennel, nigella, fenugreek and black mustard seeds, and there’s the dish that used to be called “Vegetarian Chopped Liver,” a paste of eggplant, onions, and hardboiled eggs. Of course there’s no end of ways to stuff an eggplant and there’s the ubiquitous eggplant parmesan, but, truth be told, if I were an eggplant, being breaded, fried, slathered in tomato sauce, and covered with cheese would be my idea of a fate worse than rotting on the vine.
Even including eggplant parmesan, though, one thing is very clear. When it comes to eggplant cookery, there’s not a single young Arab bride-to-be who couldn’t outleague me in a heartbeat. And there’s something else that’s equally clear. She’d know what to call it. 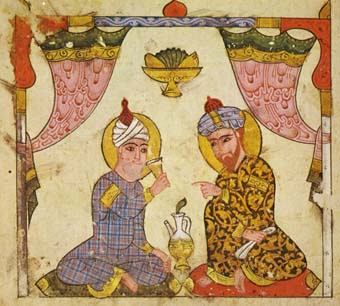 Spicy Szechuan Eggplant
Peanut oil, enough to coat the wok or pan
4-5 cloves garlic, minced
2” piece fresh ginger, minced
3 scallions, thinly sliced
Eggplant, either 1 large one or several long slender ones (the Chinese or Japanese varieties are best in this dish), cubed, but not peeled
2 tbsp soy sauce
Chili sauce to taste (start with 1 tsp and build up)
2 tsp sugar
2 tsp Chinese black vinegar (or red wine vinegar)
1 tsp sesame oil
Cilantro, chopped but not too finely
Heat enough oil to coat the bottom of a wok or large sauté pan & briefly stir-fry the garlic, ginger, and scallions just until fragrant. Add the eggplant cubes and stir to coat. Add the soy sauce, chili sauce, sugar, and vinegar & stir to coat. Let cook for 15-20 minutes, stirring frequently, until the eggplant is soft, brown, but not too sludgy. Add the sesame oil and cilantro and stir to coat. Serve hot with rice. This is even better cold the next day, with an extra splash of soy sauce and sesame oil.
Posted by Ina Lipkowitz at 10:49 AM

Email ThisBlogThis!Share to TwitterShare to FacebookShare to Pinterest
Labels: Aubergine, Eggplant, separated by a common language