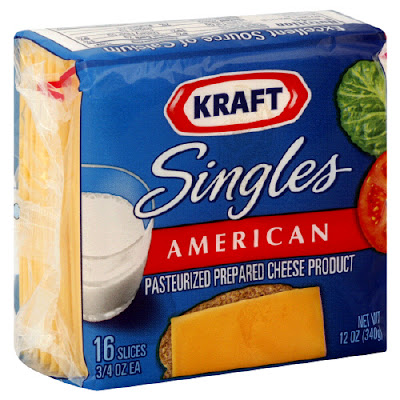 You have to pity the poor American Cheese Society. You also have to wonder about Dr. Frank Kosikowski, the Cornell University professor who founded the society back in 1983. Don’t get me wrong. I’ve got nothing against a society dedicated to supporting “the understanding, appreciation, and promotion of farmstead, artisan, and specialty cheeses produced in the Americas.”
But couldn’t Kosikowski have come up with a better name? The American Cheese Society?
Ask your average American what American cheese is. Ten to one it won’t be the stuff the ACS has in mind—cheeses like Capriole Farmstead’s Julianna, a raw goat milk cheese sprinkled with Herbes de Provence or Cowgirl Creamery’s organic triple-cream Mt Tam.
No. Ask your average American and you’ll get one answer. Kraft Singles. OK. Maybe there’s a second answer. Land O’ Lakes American cheese, sliced at the deli counter. Keep pressing the point and you might even get a third: the spreadable stuff in jars (think Cheez Whiz) or the spray stuff in cans (think Easy Cheese). 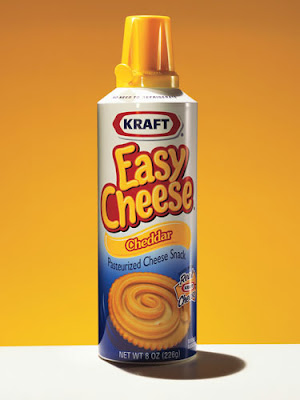 Ask the U.S. Code of Federal Regulations what American cheese is and you’ll get a more precise but similarly unartisanal answer: “a type of pasteurized processed cheese.”
More specifically still, according to Article 133, Section 169, paragraph (e)(2)(ii) of the Code, “when cheddar cheese, washed curd cheese, Colby cheese, granular cheese, or any mixture of two or more of these is combined with other varieties of cheese in the cheese ingredient, any of such cheeses or such mixture may be designated as ‘American cheese.’” Somehow I doubt whether American cheese—understood in its legal sense—would satisfy the ACS’s dream of “add[ing] diversity to the nation’s diet and preserv[ing] long-standing methods and traditions.” Diversity? You can buy the same packaged slices from New York to California. Long-standing methods and traditions? Only if your idea of long-standing traditions goes no farther back than 1916, when James L. Kraft patented his new method of processing leftover bits of Colby and Cheddar. (By way of comparison, think of this: cheddar cheese has been made since at least the 12th century). 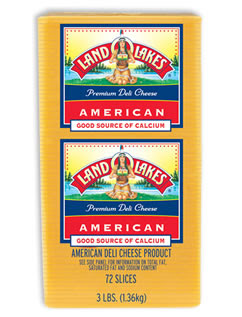 Well, it may not win any awards from the ACS, but American cheese represents half of all the cheese eaten in the United States. In his wildest dreams even Kraft himself couldn’t have imagined what would become of his frugal attempt to reduce waste by shredding refuse cheddar cheese, re-pasteurizing and emulsifying it into “a homogeneous plastic mass” that melts smoothly without separating into ooze and oil, making it the perfect cheese for the millions (billions?) of grilled cheese sandwiches and cheeseburgers Americans eat every year.
But did you know that American cheese isn’t food at all? Not, at least, according to the US Code of Federal Regulations. “Pasteurized process cheese food” refers, not to American cheese, but to a product that, by definition, must consist of at least 51% cheese ingredients (the other 49% consisting of flavorings and additives such as acidity regulators, preservatives, emulsifiers, vitamins and food colorings), a moisture content of less than 44%, and have at least 23% milkfat. And then there’s something called “Pasteurized process cheese spread” which is similar to “pasteurized process cheese food” but has to have a greater moisture content so it can remain spreadable at 70°F. Finally there’s what’s known as “Pasteurized process cheese product” for which no standard of identity has yet been codified—which means that anything can call itself a cheese product and get away with it.

Calling “cheese food” “cheese” can get you in serious trouble. So can calling a “pasteurized process cheese product” “cheese food,” as Kraft Foods discovered in 2002 when they received a letter from the Department of Health and Human Services telling them that their Kraft Singles American Pasteurized Process Cheese Food “are misbranded . . . in that they purport to be or are represented as a food.”
You gotta love it. The cheese eaten by more Americans than any other is only purporting to be food.
Look closely at the packaging next time you’re at the supermarket. Before 2002, what you would have put in your grilled cheese sandwich was sold under the name “American Pasteurized Prepared Cheese Food.” After 2002, though, in response to the Department of Health and Human Services’ letter, “food” was dropped from the label. Today what you give your kids for lunch isn’t “food” at all, but “product”: “American Pasteurized Prepared Cheese Product.”
I ask once again: what was Professor Kosikowski thinking of?
Posted by Ina Lipkowitz at 5:11 PM