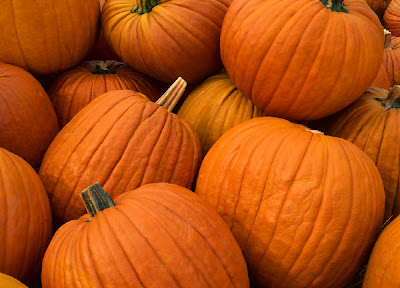 At this time of year, you can’t ignore them. They’re everywhere. There’s not a doorstep in my neighborhood that doesn’t boast at least one of them. They line the entrance to the supermarkets and the farm stand up the road may as well be Noah’s ark bobbing about in a vast expanse of autumnal orange.
Pumpkins, of course. The undisputed king of the season that begins at Halloween and extends straight through Thanksgiving. What other vegetable is so . . . well, so big? “The blue whales of the vegetable world”—that’s what John Ayto calls them in his The Diner’s Dictionary.
So here’s what I don’t get. Munchkins are little bites. Gherkins are little pickles. Napkins are little cloths. Manikins are little men. And pumpkins? Little . . . what? Who could ever have looked at a pumpkin and called it little?
My etymology dictionary tells me the word traces back to the Greek pepon, which meant melon—but that doesn’t really help me very much because as far as I’m concerned, pumpkins and melons have little in common except their size and the fact that they’re both filled with lots of seeds. In Latin it was a pepo, in Middle French a pompon, and in England for quite a long time it was a pompion, also spelled pumpion. Sometime in the seventeenth or eighteenth century someone had the bright idea to add the –kin suffix which in virtually every other instance you can think of denotes either smallness or affection, as in “oh, my little lambkins” and “what a sweet little babykins.” But why would a vegetable known above all else for its sheer size have acquired such an endearingly diminutive suffix? As I said, I don’t get it. Apparently no one else does either because not a one of my reference books hazards so much as a guess. Hasn’t anyone else ever wondered how the pumpkin got its suffix? 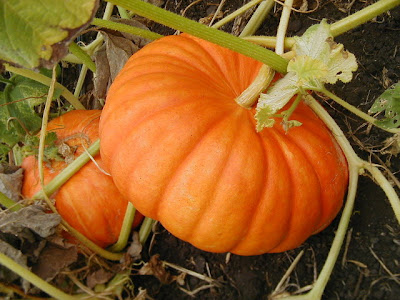 Maybe it’s that it’s hard to take such an enormous vegetable seriously. For centuries people have been using it to mock pretensions of grandeur. The Roman writer Seneca referred to the deification of the Emperor Claudius as his “pumpkinification”—not all that different, when you think about it, from the pumpkinification of the pumpkin itself into Cinderella’s magic coach. And no one has ever relished being called a “pumpkin-head”: “They ain’t got two ideas to bless themselves with, the stupid punkin-headed consaited [sic] blockheads!” wrote the humorist Thomas Chandler Haliburton in the mid-nineteenth century.
All this said, I’ll confess to an affection for the oddly-named vegetable. It’s hard to think of another that can compete with that other gargantuan of the season: the ginormous turkey. Because my Thanksgiving table has a sizeable contingent of vegetarians, there’s always an entrée just for them and it almost always features the pumpkin. One year it was pumpkin-stuffed ravioli with a sage brown-butter sauce. Another time it was a Native American vegetable stew served in a hollowed-out pumpkin. But this year, I’ll once again make my daughter’s favorite: a Cheddar-Pumpkin Tart with a Whole-Wheat Parmesan Crust.
Cheddar-Pumpkin Tart (makes one 9” tart)
For the crust:
1 cup unbleached all-purpose flour
½ cup whole wheat pastry flour
¼ cup grated fresh Parmesan
½ tsp salt
8 tbsp cold unsalted butter
1 egg yolk
¼ cup cold water
Mix the dry ingredients together in a food processor. Add the butter, cut into small pieces, and pulse until the mixture looks like coarse sand. Add the egg yolk and water, and pulse until the dough just comes together. Wrap the dough in wax paper and refrigerate until firm. Roll out between wax paper and place into a 9” tart pan with removable bottom; double over the outer edge to make a thicker outer crust. Refrigerate for 30 minutes. Line with aluminum foil, fill with pie weights (or dried beans) and bake for 10 minutes at 400. Remove foil and weights, prick the bottom and sides with a fork and bake 10 minutes longer, until golden brown. Cool on wire rack.
For the filling:
2 tsp butter
1 tsp canola oil
1 medium onion or 2 leeks, thinly sliced
½ tsp salt
¾ cup pureed pumpkin (canned is better because drier)
2 eggs
½ cup cream
½ tsp dried thyme
¼ tsp white pepper
3 ½ ounces sharp Cheddar cheese (about 1 ½ cups)
Melt 1 tsp butter and the oil in large skillet over medium heat. Cook onion or leeks 10-12 minutes, until soft, stirring often. Sprinkle with salt and set aside.
Beat pumpkin and eggs together in medium bowl. Add the cream, a bit of salt, thyme, and pepper to taste.
Assemble the tart: scatter the cooked onion or leeks on the bottom of the cooled crust. Sprinkle the cheese over the onion. Pour the pumpkin mixture on top and spread over the cheese. Dot with remaining teaspoon of butter and bake for 30-40 minutes, or until a knife inserted in the center comes out clean. Serve hot, warm, or at room temperature. (adapted from DeeDee Stovel’s Pumpkin: A Super Food for All 12 Months of the Year)
Note: Because Thanksgiving itself is a bit crazed around here, I make this tart a day or two ahead of time and keep it wrapped in foil in the refrigerator. Then, when the turkey comes out of the oven on the big day (it needs a bit to time to rest anyway), I just slip the tart into the oven to reheat.
Posted by Ina Lipkowitz at 7:40 AM