On Giving Thanks & Eating Turkey 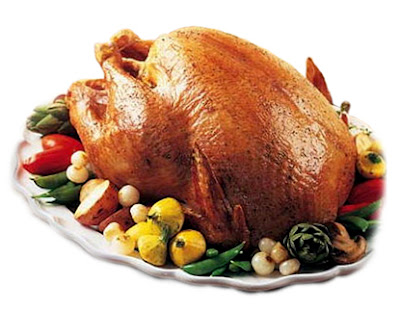 My guess is that if you’re a product of the American public school system, at some point in your early years, you paraded to the cafeteria in either a floppy white paper hat or a brown construction paper headband with orange and brown feathers. Who doesn’t remember learning about the story of the first Thanksgiving when the grateful pilgrims sat down to a three-day-long feast with their friends, the Wampanoag Indians? 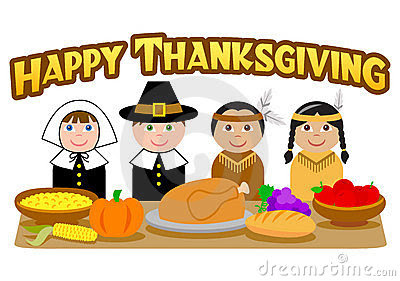 You can imagine my surprise, then, when I read in Andrew Smith’s Eating History that Thanksgiving has much less to do with pilgrims and Indians than it does with two women novelists I’d never even heard of: Sarah Josepha Hale and Jane G. Austin (no relation to the far more famous Jane Austen of Pride and Prejudice fame).
Yes, a meal was shared by the pilgrims and the Wampanoag Indians at Plymouth Colony in 1621, when then Governor William Bradford declared a holiday after the harvest, but the day in question was in no way considered to be one of thanksgiving. Anyone who knows anything about the pilgrims knows that a day of thanksgiving would have been spent on one’s knees thanking God in church, not gluttonously feasting around a groaning board. They were Puritans after all! 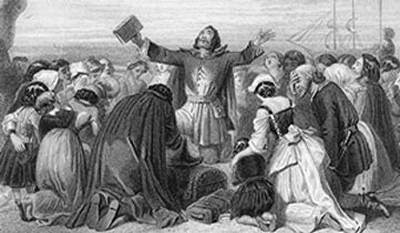 Our first president was no Puritan but he agreed that thanksgiving was one thing and a celebratory meal quite another. Washington frequently declared days of thanksgiving, but he also went out of his way to recommend that “such Recreation, as, though at other Times innocent, may be unbecoming the Purpose of this Appointment, be omitted on so solemn an Occasion.”
All things considered, you have to wonder how such solemn days of thanksgiving managed to turn into our Thanksgiving extravaganza, complete with the Macy’s Day Parade, football games galore, and enough food to sink a ship.
Well, people being what they are, festive thanksgiving dinners were celebrated around the country, although not necessarily on the same day and not necessarily with the same food. In her 1823 novel Northwood; or, a Tale of New England, Sarah Josepha Hale—later known as “the Mother of Thanksgiving,” devoted an entire chapter to one such dinner, complete with roast turkey, gravy, and pumpkin pie. Shortly after, she made it her mission to have Thanksgiving declared a national holiday. For the next forty years, she lobbied any and all politicians she could, ultimately appealing to President Lincoln himself. In the summer of 1863, on the heels of the decisive battles of Gettysburg and Vicksburg, he granted her wish. Thus it was that the last Thursday in November became a national holiday, celebrated in both North and South.
Some twenty years later, another writer provided the newly nationalized holiday with its colonial history. In her Standish of Standish: A Story of the Pilgrims, Jane G. Austin sent the Thanksgiving feast back in time: straight back to that 1621 harvest holiday declared by William Bradford. All of sudden, the pilgrims and Indians sat down, not to a bountiful harvest celebration, but to a Thanksgiving meal of clam chowder, oysters, turkeys stuffed with beechnuts, venison pasties, not to mention all manner of roasts, vegetables, ales, and root beer. 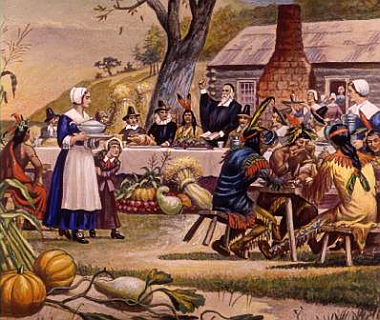 Thus it was that the pilgrims’ harvest festival was transformed into a national day of Thanksgiving signed into law by President Lincoln in his desire to unite a war-torn country.
But still there’s the matter of the turkey. Why “Turkey Day” in particular?
Well, on the one hand, it’s symbolic. Native to America, the wild turkey was Benjamin Franklin’s choice for the national bird: "For my own part I wish the Bald Eagle had not been chosen the Representative of our Country. He is a Bird of bad moral Character . . . The Truth [is that] the Turkey is in Comparison a much more respectable Bird, and withal a true original Native of America.” 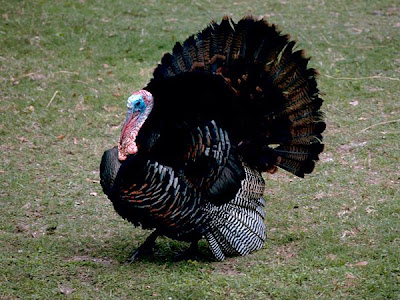 On the other hand, it’s affordable—at least as compared to a standing rib roast or beef tenderloin—as are stuffing, sweet potatoes, corn bread, cranberry sauce, and pumpkin pie. In this regard, TV chef Sandra Lee couldn’t be more in the spirit of Thanksgiving with her cost-cutting menu that promises a festive dinner for eight for no more than $45.00 (as she says, “that’s less than $6.00 a person!”).
Symbolic and affordable. It united our country and still does. Every immigrant group makes the turkey its own, stuffing it with basmati rice, jasmine rice, fried rice, sauerkraut, and even refried beans—foods those long ago pilgrims and Wampanoag Indians could never have imagined!
Does it bother me that Thanksgiving turns out to be as much literary creation as historical fact—and perhaps a little bit more? Not in the slightest. What would Christmas be, after all, without Charles Dickens and his tale of Ebenezer Scrooge?
As I’ve often had reason to conclude, never underestimate the power of the pen!
Posted by Ina Lipkowitz at 10:38 AM