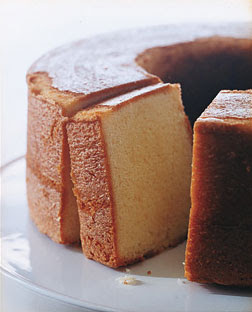 Just a little more than a week after Thanksgiving and already the turkey’s no more than a memory. The last slices of pie have long since disappeared. It’s funny. For the few weeks leading up to Thanksgiving, all I could think of was pie: apple, sweet potato-pecan, and pumpkin-praline. But now that the last Thursday in November has come and gone, pie’s the farthest thing from my mind and I’m not likely to bake another one for quite some time.
Which doesn’t mean I’m retiring my oven mitts—simply that when I bake during the rest of the year, I'm far more likely to think cake. I don’t need a holiday for inspiration. I hardly even need a reason at all and often find myself standing in the kitchen in front of my workhorse of a KitchenAid, creaming butter, sifting flour, adding wet and dry ingredients alternately, and pouring the batter into round or square pans—but more often into a bundt pan (much as I love cakes, I’m not as fond of frosting, and so prefer the unadorned nakedness of a bundt cake).
This makes me wonder. Why do I bake pies for Thanksgiving but cakes the rest of the year?
Well, on the one hand, they’re easier. Whoever it was who first claimed something was “easy as pie” didn’t know what he was talking about. Pie crusts can be tricky and require technique, not to mention such special equipment as rolling pins and pie weights. Fillings have to balance precariously between moist juiciness and stodgy solidity.
Cakes, on the other hand, can be whipped out by a child. I know this for a fact. I started baking them when I was a girl. Following the recipe from the Betty Crocker’s New Boys and Girls Cookbook, I submitted a Chocolate Fudge Cake to a Girls Scouts Cake Competition. I went on to make the Jack-o’-Lantern Cake for my brother’s late-October birthday and the red and white Heart Cake for Mother’s Day. I also remember making the Enchanted Castle Cake for my own birthday, complete with inverted ice cream cone turrets and pink pillow mint crenellations. 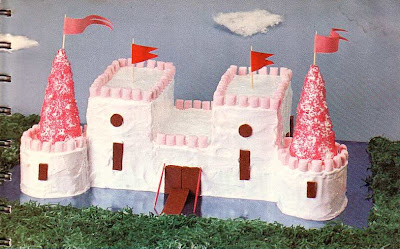 These cakes of yore may bring a nostalgic smile to my face, but they give me food for thought as well. Who ever heard of a birthday pie? A wedding pie? An anniversary pie? The practical explanation is that a pie can be only so big and you can’t very well layer them or decorate them with icing roses. Nor does a pie crust offer a smooth surface on which to write your heartfelt message.
But I think there’s something else. I think that cakes speak to us in a way that pies don’t. Why else do you never hear anyone call out, “If I’d ‘a known you were coming, I’d ‘a baked a pie”?

In this regard, I find it revealing that we’ve never been tempted to call them anything but what they are: cakes. We regularly pass our pies off as tarts when we want them to sound fancy. In an earlier post, I wrote about our penchant for speaking French when we want to sound as elegant as possible: just compare an apple pie to a tarte aux pommes. But when was the last time you heard someone call a cake a gateau? Even when they’re dressed to the nines, they’re cakes, plain and simple. Appropriately, they trace back not to a French word, but to the German Kuchen, which in turn derives from the not-very-glamorous sounding Old Norse kaka (the ancestor, by the way, of our most basic cooking word of all: to cook). 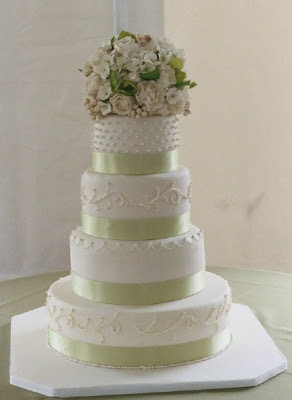 It seems fitting to me that cake should have a name that comes to us from the Vikings rather than from the Mediterranean. Northern Europe, after all, is where cakes came into their own, no doubt because northern Europe is famous for its butter—and without butter, our default idea of cake simply wouldn’t be. Yes, there are sponge cakes that rely on egg whites and yes, there are moist cakes that use oil rather than butter, but as Flo Braker writes in her wonderful The Simple Art of Perfect Baking,
When you are thinking of making a cake, a butter cake is likely to come to mind. Butter cakes are part of our past. Our birthday cakes, our wedding cakes, our everyday cakes are butter cakes. It’s the butter cake recipes that have been passed down from family to family: American classics, such as the 1-2-3-4 Cake and Wellesley Chocolate Cake, as well as untitled splendors, such as yellow cake, gold cake, Bundt cake, and good old-fashioned pound cake.
Don't get me wrong. I enjoy a pie as well as the next person, but there’s just something about cakes. 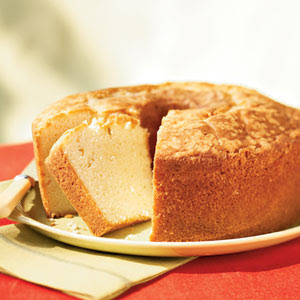 They say the purest ice cream is vanilla; with no additional flavorings, distracting chocolate chips, or streaks of toffee, the main flavor's got nowhere to hide. By the same logic, a simple pound cake has got to be the purest cake of all: nothing but butter, sugar, eggs, and flour (and, in this case, a pinch of salt, and a dash or two of vanilla and lemon juice). Try this one the next time you want to bring a smile to your family’s face. It's the essence of cake. It never fails.
Edna Lewis’s Pound Cake
½ lb unsalted butter
1 2/3 cup sugar
¼ tsp salt
5 eggs
2 cups sifted flour
1 tbsp vanilla extract
1 tsp lemon juice
Butter a 9 or 10” tube pan and preheat the oven to 300. Cream the butter and when it’s very fluffy, add the sugar and salt. Cream well. Add the eggs, one at a time, incorporating well after each one; after the third egg, add 2 tbsp of the flour. Add the rest of the flour in four additions, taking care not to overmix. Blend in the vanilla & lemon juice. Spoon into tube pan, drop on the counter to burst any bubbles, and bake at 300 for 40 minutes, and then at 325 for another 20 minutes, or until done. Let cool on a rack for 5 minutes, before turning out and letting cool completely. You can, of course, glaze the cake with anything you want—lemon, chocolate, coffee, etc—but I like it plain best of all.
(Adapted from Edna Lewis & Scott Peacock’s The Gift of Southern Cooking)

Posted by Ina Lipkowitz at 9:43 AM