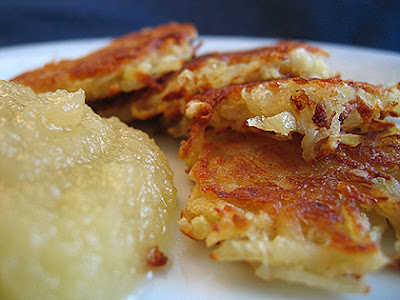 A few months ago, I went on record confessing that I don’t much care for honey, which makes celebrating Rosh Hashanah, the Jewish new year, a bit tricky because you’re all but obliged to serve up a honey cake to your friends and family. Well, now I’ve got another dilemma on my hands. It’s Chanukah and I’m supposed to be frying up a big batch of latkes. Here’s the hitch. I don’t like frying anymore than I like honey. All that oil spattering about, the smell that just doesn’t quit, and then—of course—there’s the matter of the fat and calories. Oil isn’t something I typically use by the quart and it’s astonishing how much oil you need to fry up a batch of latkes. In his book Jewish Food: The World at Table, my old friend Matthew Goodman notes in this regard that the word latke traces back to the Greek eladion, an oil cake, or, “as the American Heritage Dictionary prefers to define it . . . a ‘little oily thing.’” How good does that sound? A nice big plate of little oily things. 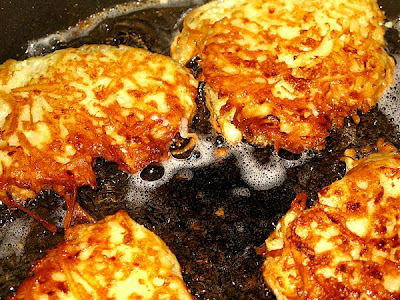 Don’t get me wrong. It’s not that I don’t like a good fried chicken now and again and far be it from me to turn my nose up at a plate of fried shrimp and onion rings. When I lived in North Carolina, I became absolutely addicted to the fried okra you’d see on the menus of such haunts as Breadmen’s and Mama Dips (“Put a little south in yo’ mouth!”).
But I don’t generally fry at home. Which brings me back to my Chanukah dilemma. I could, I suppose, bite the bullet, grate the potatoes and onions, squeeze out the liquid (I’m always amazed by how much liquid comes out of a potato!), add some matzah meal, salt and pepper, start frying away, and then serve up a great big platter of latkes accompanied by an equally great big bowl of apple sauce. And there are plenty of years I do just that. 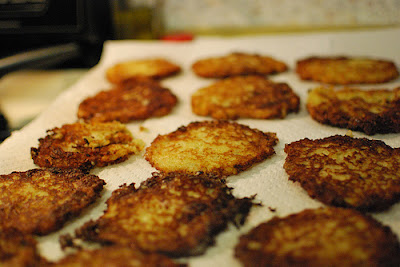 But this year, I’m going to do something different. In the first place, I’ve only recently made the realization that that’s nothing inherent about the connection between potatoes and Chanukah anyway. The holiday commemorates the military victory of the Maccabees in 2nd century BCE Judea and potatoes didn’t leave their home in South America until after Christopher Columbus arrived in the late fifteenth century CE. There’s no way the ancient Maccabees could have been frying up potato latkes to celebrate the oil that, legend has it, miraculously lasted for eight days.
In the second place, for all sorts of reasons, it’s just my daughter and me this year and since she’s a life-long vegetarian, the latkes can’t play their usual role as accompaniment to that other staple of Jewish-American holiday cooking, the brisket (whether sweet and sour or not). In years past, we’ve tried promoting them to starring role by varying them up. One year we made zucchini latkes (pretty good); another, grated beet, carrot, and sweet-potato ones (even better); and still another, Asian latkes with a soy dipping sauce (best of all!).
But this year, we’re going to dollop our applesauce on top of one large skillet-sized apple latke that we’ll serve pie style, sliced in wedges. It might not use as much oil as your traditional latke, but we like it just fine. We tend to serve it up with a big bowl of yogurt, but sour cream would obviously be just fine too.
Skillet-Sized Apple Latke
2 eggs
½ cup milk
1 tbsp vegetable oil
¾ cup all-purpose flour
2 tbsp sugar
1 peeled & thinly sliced apple
Whisk eggs, milk, and oil. Add the flour & sugar. Stir in apple slices. Heat a pat of butter (or a bit of oil) in a 10” omelet pan until it’s very hot. Pour in the apple batter and cook until golden brown on the bottom (peek underneath with a flexible spatula). If you’re up to it, flip high in the air to brown the other side; if you’re not, slide out onto a plate and invert the latke back into the skillet.  While the underside is browning, sprinkle the top with cinnamon & sugar.  Serve with applesauce & yogurt or sour cream.
Note: I make my applesauce exactly the way my mother does. She uses any kind of apples she’s got—or a mixture of all different kinds—and, without bothering to peel them, cuts them into wedges with one of those handy apple segmenters-and-corers all in one. She then puts the apple slices into a heavy pot, covers it up, and leaves it to sit over low heat for an hour or so, stirring from time to time. No sugar. No cinnamon. No water. The apples gradually collapse, giving off all their juicy deliciousness. When she can mush a wedge against the side of the pot with no resistance whatsoever, she puts the whole mess through a Foley food mill, the kind you can only buy at hardware stores, not at expensive culinary emporia. As the apples go through the mill, the peels and any remaining seeds get left behind. What you’ll have in your bowl will be the best applesauce you’ve ever had. Guaranteed.
Posted by Ina Lipkowitz at 3:52 PM