The United Colors of Rice 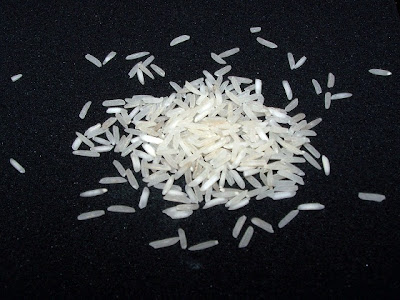 Although I know many people do, I generally don’t plan out a week’s worth of dinners in advance. Which means that sometimes eating gets a bit ad hoc around here. Like last week for instance. Somehow it didn’t occur to me until Thursday that I’d made something with rice every single night. On Sunday, we had miso-glazed tofu with edamame on Japanese sticky rice. On Monday it was curried cauliflower and chickpeas on Indian basmati rice. On Tuesday, I had a sudden hankering for arroz con pollo (Spanish for chicken with rice). Wednesday saw me stirring up some arborio rice into a pot of my favorite risotto with wild mushrooms. By the time Thursday came around, I took the cold sticky rice that had been waiting around all week in the fridge and stir-fried it with whatever vegetables and bits of tofu I could find and ended the week with—you guessed it—fried rice. I’m almost embarrassed to tell you what we went out for on Friday night. Sushi. 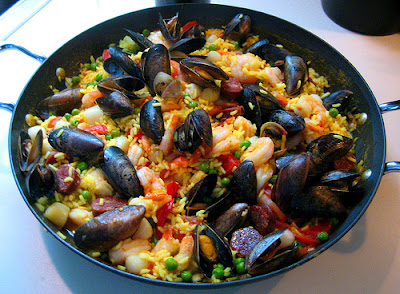 The week reminded me of a dinner party I gave some years back. I served that marvel of Spanish cuisine, a Paella Valenciana with its saffron-scented rice studded with shrimp, clams, mussels, and chorizo. Entirely on his own, my son produced his favorite dessert for the occasion: arroz con leche, the Mexican version of rice pudding into which you stir sweetened caramelized milk known as cajeta.
Obviously I’ve got a fixation with rice. But, to my defense, so does the rest of the world. It’s the staple food for roughly half the earth’s inhabitants (human inhabitants, that is)—which means that about 3 ½ billion people eat rice on a daily basis. The Chinese don’t even have different words for cooked rice and food; they’re both fan. Everything else, whether chicken, pork, vegetables, or tofu, is mere accompaniment, “cai.” 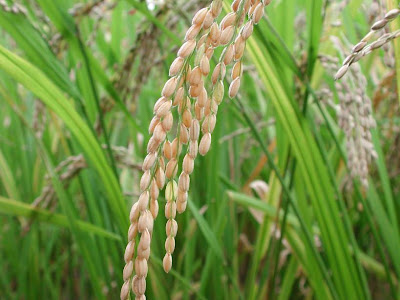 No surprise that it was the Chinese who first cultivated rice more than 8,500 years ago. Gradually it made its way across Asia and into India, where it was called vrihi in Sanskrit. The Persians brought grains of vrihi with them to the eastern Mediterranean and the Greeks soon adapted the word to oruza, which lies behind the name in virtually every European language, from Russian ris to Italian riso, French riz, Dutch rijst, Serbo-Croatian riza, and, of course, our English rice. Legend has it that rice cooked in clarified butter was one of Mohammed’s favorite dishes; in due deference to their prophet, Muslims brought rice with them as they spread throughout North and West Africa and into Spain, Sicily, and Turkey.
Columbus might have taken the tomatoes, potatoes, squash, and chocolate from the New World, but in return, he gave the gift of rice. Granted, it took a few centuries for the crop to take off, but by the 1690’s, so-called “Carolina Gold” was flourishing around Charleston, South Carolina. You can still buy boxes of Carolina® Rice in supermarkets today. In those early days of our country, Thomas Jefferson went so far as to defy a threatened death sentence by smuggling unhusked grains of rice out of the Piedmont region of Italy—“as much as my coat and surtout pockets would hold”—in his efforts to promote the sale of American rice in France. Apparently he’d been told that Carolina rice was considered inferior to Italian rice because it wasn’t white enough. No surprise that he also acquired the tool the Italians used to clean their rice. 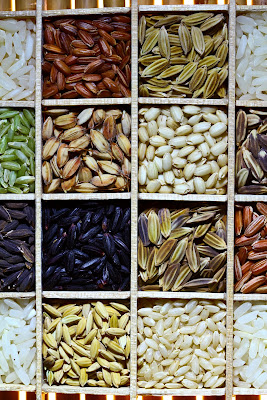 Gone are the days of death sentences for rice smuggling and gone too are the days when white rice reigned supreme. It’s appropriate, when you think about it, that since it’s eaten by people of so many colors, it should come in so many colors as well: white, yellow, red, brown, and black.
Enough talk. I’m getting hungry. It’s time to think about dinner. It’s been too long since I cooked up a big pot of a good old Louisiana Creole jambalaya.
Jambalaya (serves 4-6)
1 tbsp oil
¼ lb sliced smoked sausage
¾ lb cubed chicken breast
½ lb cubed smoked ham
1 heaping tbsp. seasoning mix (see below)
1 cup chopped onion
1 cup chopped green pepper
1 cup chopped celery
3-4 minced garlic cloves
1 16 oz can diced tomatoes in juice
1 14 oz can chicken broth
1 ½ cup white rice
In a Dutch oven, heat oil over medium heat. Brown sausage. Add chicken & cook until done. Drain off fat. Stir in ham & cook 2 minutes. Stir in seasoning mix and vegetables. Cook, stirring until vegetables are almost tender, about 5 minutes. Stir in tomatoes and broth. Bring to boil. Stir in rice. Cover & reduce heat to simmer. Cook, covered, until rice is tender, 20 minutes. Serve with Tabasco & filé powder.
Seasoning mix: 1 tbsp dried basil, 1 tbsp dried oregano, 1 ½ tbsp. paprika, 1 ½ tsp dried thyme, ½ tsp cayenne, ¼ tsp black pepper, 1 tsp garlic powder, ½ tsp mace, 1 bay leaf. Makes 1/3 cup; store in a glass jar.
A final note: Although rice is a staple food for half the world’s people, according to the World Hunger Organization, over 925 million people went hungry last year. Here’s a small way you and/or your kids can contribute to wiping out such hunger by going online to freerice.com. Click on “Subjects” at the top of the page and choose your favorite category. Each time your child (or you) answers a quiz question correctly, FreeRice donates 10 grains of rice through the United NationsWorld Food Programme. Each grain might be tiny, but to date, they’ve donated more than 91 billion grains to countries around the world.
Posted by Ina Lipkowitz at 9:44 AM