"Soup of the evening, beautiful Soup!" 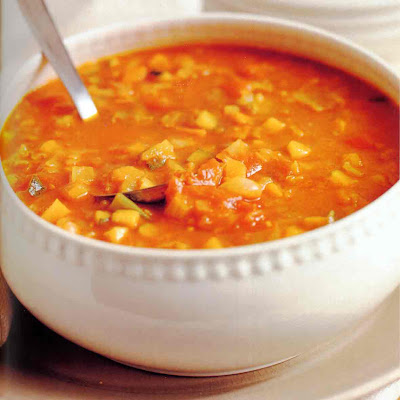 Perhaps it was the freakish snowstorm that blanketed the northeast last weekend that got me thinking about soup. Of course there are summer soups—and I like a good gazpacho as well as the next person—but somehow it’s when the weather turns wintry that visions of soup bowls dance through my head. Thus it was that Sunday afternoon saw me standing at my stove (very luckily I was not one of the thousands who lost power), stirring up a big pot of dried mushroom and barley soup (dried mushroom because I had no fresh ones on hand but remembered a few mason jars of dried porcinis and shitakes in the cabinet).
And as I stood there stirring away, I got to thinking. There are two types of people in the world, I decided, those who like soup for dinner and those who don’t. Compare the following two soup memories and you’ll see what I mean.
My brother-in-law, whom in almost every respect I like very much, asked me what I was having for dinner that night. “Soup,” I replied, to which he turned to my sister (his wife) and said, “Know what I’d do if you served soup for dinner?” “Yeah. Send out for pizza.”
Only a few days later, a friend of mine collapsed in a chair by my desk and told me of her domestic tragedy: someone who for obvious reasons later refused to identify him or herself arrived home, saw a pot of what looked to be a whitish-grayish liquid, and, believing him or herself to be lending a helping hand, poured the entire pot of what turned out to be a potato-leek soup down the drain, very considerately washing up afterwards. My friend was crushed. She’d made the soup, left it on the stove, gone out to the gym, knowing that a warm comforting supper would be waiting when she returned. The thought of that nourishing liquid vanishing down the drain reduced her to tears. The food of sustenance sustaining no one.
I’ll put my cards on the table: I’m solidly in the camp of those who regularly have soup for supper. In fact I’ll go so far as to make the claim that soup is the quintessential supper: the two words are related after all, both tracing back to the ancient sup, from which we get our sop (the piece of bread used to soak up the broth, the ancestor of our croutons), soup (as the broth or pottage came to be called), and our supper. 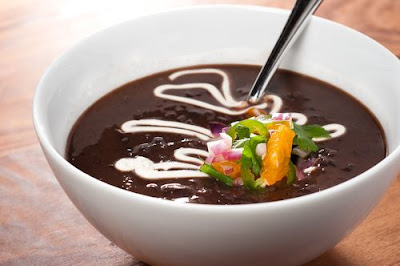 It’s not at all uncommon to find me on a Sunday afternoon stirring up a pot of soup. I have no ethnic or national loyalty in this regard and am equally happy with Cuban black bean soup with sherry and lime; North African lentil soup spiced with cumin, coriander, turmeric, and ginger; Greek avgolemono, that puckeringly lemony chicken soup fortified with eggs and rice; Ezogelin Çorbasi, a Turkish red lentil and bulgur soup flavored with Aleppo pepper, paprika, and mint; Thai tom yam redolent of chili paste, limes, and cilantro; French onion soup laced with a splash of cognac; Hungarian mushroom-barley soup served with a dollop of sour cream and a sprinkling of dill; Italian minestrone simmered with the rinds of parmesan cheese I freeze just for the occasion;  or a good old traditional Jewish chicken soup with matzo balls. As I stand there peering into my United Nations-of-a-soup kettle, I can often be heard reciting lines to myself from the song of the Mock Turtle from Alice in Wonderland:


On the other hand, you might just hear me humming the words of a Maurice Sendak poem that Carole King later put to music: “I told you once, I told you twice, all seasons of the year are nice for eating chicken soup with rice!” 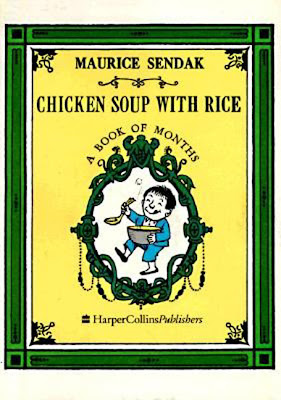 To my mind, the soup kettle should rightly be called a soup cauldron for in it the vital essences of bones, legumes, vegetables, grains, herbs, and spices are slowly but surely extracted—as though alchemically—and transformed into something far greater than the sum of its parts. The odds and ends found in the vegetable drawers of the refrigerator and the shelves of the pantry are transmogrified into an elixir of life.
You might think of the old folktale called “Stone Soup” in this context. Some travelers (or, in some versions of the tale, soldiers) turn up in a none-too-hospitable village with nothing but their appetites and a big empty soup kettle. Desperate to fill their stomachs, they announce they will brew up a broth of nothing but water and stones, and the villagers are so intrigued that they are hoodwinked into donating a bit of this and a bit of that to “enhance,” as the travelers say, the flavor of the stones. What more perfect illustration of our belief in soup’s almost magical ability to extract more-than-something from less-than-nothing?  What more perfect illustration, as well, of soup’s ability to bring out the best in people? 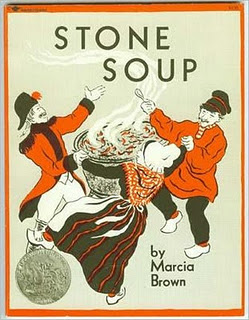 You try it. Invite some friends over for supper. Serve them soup. Try the recipe for Moroccan Lentil Soup, from Annie Somerville’s wonderful Fields of Greens. See what happens. Who knows? You might even win over my brother-in-law.
Moroccan Lentil Soup (8-9 cups)
1 cup lentils
6 cups cold water
1 tbsp olive oil
1 medium onion, diced
salt
cayenne pepper
1 carrot, diced
1 celery rib, diced
1 small red or yellow pepper, deced
1 tsp cumin seed, toasted and ground
½ tsp ground coriander
1/8 tsp turmeric
4 garlic cloves, minced
1 tbsp grated fresh ginger
8 oz can tomatoes with juice, chopped
2 tbsp chopped cilantro
Place lentils in a soup pot with the cold water. Bring to boil, then reduce the heat and simmer, uncovered, until just tender (but not mushy), about 20 minutes.
Meanwhile, heat olive oil in sauté pan and add the onions, ½ tsp salt, and a few pinches of cayenne. Cook over medium heat until soft, 7-8 minutes, then add the vegetables, another ½ tsp salt, and the spices. Cook for 5 minutes, then stir in the garlic & ginger, and cook for another few minutes. Add the vegetables and the tomatoes to the lentils. Cover & cook for 30 minutes. Season to taste with salt and cayenne. Garnish each serving with a sprinkle of cilantro.
Note: These are Annie Somerville’s quantities; I almost always double or triple the amounts of everything, figuring that leftover soup is like money in the bank. Besides, it freezes very well & there are few things more comforting to me than the knowledge that in my freezer lurk single-serving containers of home-made soup, just waiting for me to heat them up when I’ve got an evening to myself.
Posted by Ina Lipkowitz at 8:39 AM