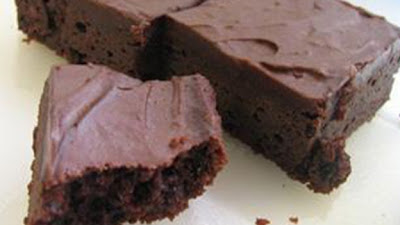 Six days into the new year, the sky is a whitish-gray, and I’m home with a cold. Tomorrow, though, is my sweetie’s birthday which means that, runny nose notwithstanding, I’m going to bake something that he loves almost as much as he loves me: something very very chocolate. Hmmmmm. Let’s see. On Christmas Day, I baked a dark chocolate tart studded with fresh raspberries and on New Year’s Eve, I made individual molten chocolate cakes, but that was when I had far more energy than I do at this moment.
I’m thinking brownies. Who doesn’t love brownies? They’ve been one of our favorite American desserts since they were first mentioned in the 1897 Sears, Roebuck Catalog. Their virtues are innumerable. They’re quick. They’re easy. They’re made from what you’ve almost always got hanging around the kitchen. You stir them up in a single saucepan which means that cleanup is a snap. You can add white chocolate chips to make them look adultly sophisticated or you can add brightly colored M & M’s to make them look childishly happy. You can adorn each one with a single candle and illuminate the whole platter for a festive birthday presentation. What’s not to love?
Simple as they are to produce, however, there is one tricky matter when it comes to baking brownies. Timing is of the essence. Take them out a minute too soon and they’re so damp you can hardly cut them; leave them in a minute too long and they’re all dried out. The window of perfection lies somewhere in the middle, but even then it’s a tough call. Some people like their brownies on the cakey side, but I find that more people prefer them the slightest bit undercooked, resulting in a consistency somewhere in between sticky, moist, and fudgy—or what the English call squidgy.
Squidgy? Judging from my circle of friends and acquaintances, Americans tend to describe fudgy brownies as just that: fudgy. Or maybe gooey, undercooked, squishy, or slumped. The English, on the other hand, refer to them as squidgy and lest you think it a made-up word, I’ll refer you to the Oxford English Dictionary. “Squidgy: Short and plump. Podgy.” (Podgy, by the way, is our pudgy, and squidge is defined as “the sound made by soft mud yielding to sudden pressure.” It’s not a new word either. Back in 1892, Rudyard Kipling referred to Gunga Din as “You squidgy-nosed old idol.” A hundred years later, the English tabloid The Sun featured an article entitled “Squidgygate” about secretly taped phone conversations in which a clearly besotted James Gilbey called Princess Diana by the pet names “Squidgy” and “Squidge,” sparking all sorts of rumors and innuendos. 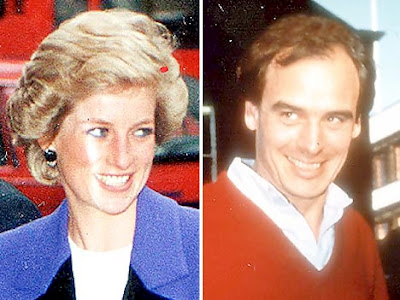 The other sense of squidgy is “moist and pliant; squashy, soggy. Especially of food.” Squashy and soggy might not sound especially appetizing if it’s cakes and cookies you’ve got in mind, but if it’s a brownie, suddenly squashy and soggy might be just what you want. By the same token, squodge—defined by Urban Dictionary as “post-partum belly fat, the kind you can't get rid of even after the kid has hit kindergarten. See also podge”—doesn’t sound at all appealing until the moment it’s applied to a brownie. To wit, consider the following description of White-Chocolate and Macadamia Brownies by the reigning queen of English cuisine, Nigella Lawson, “The important thing is to maximize squodge.” Leave it to the land of flummeries, fools, trifles, and spotted dicks to have some fun with dessert terminology.
Herewith, the recipe I’ll be using for my Sweetie’s birthday brownies:
Seriously Squidgy Saucepan Brownies (slightly adapted from Marilyn M.Moore’s The Wooden Spoon Dessert Book)
Preheat the oven to 350. Butter an 8 x 8 x 2” baking dish. In a large heavy saucepan, stir over low heat until melted and smooth:
4 squares (1 ounce each) semisweet chocolate, coarsely chopped
8 tbsp unsalted butter, cut into pieces.
Remove from the heat. Stir in, in this order, adding the eggs one at a time (blend well, but do not overmix):
1 cup sugar
2 large eggs
¼ tsp salt
1 tsp pure vanilla extract
¾ cup unbleached all-purpose flour
(Optional: ¾ cup white chocolate chips, M & M’s, or chopped walnuts)
Spoon and scrape into the buttered dish, spreading the thick batter into the corners with the back of the spoon. Bake at 350 for about 25 minutes. The edges should be about dry; the center should still be soft to the touch. (Bake them for 30 minutes if you like your brownies less squidgy.) Cool in the pan on a wire rack. Cut into squares to serve. Makes 16 brownies.
Posted by Ina Lipkowitz at 4:22 PM