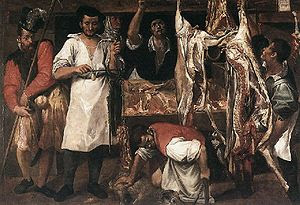 It’s a curious fact that although so many English words trace back to the Latin word for meat, carnis—carnage, carnal, carnation (named after its fleshy pinkness), carnival (a portmanteau word combining carne and vale; literally, “good-bye to meat”), carnivore, incarnation, to name only a few—when it comes to the substance itself, we insist on using an entirely different word: meat. What’s even more curious is that until the past few centuries, the word didn’t mean what we understand it to mean today. If it did, how could the King James Bible (1611) have God tell Adam and Eve that “I have given you every green herb for meat”? Herbs as meat? Strange as it may sound to us, time was when meat meant food in general. If you wanted to refer to the edible tissue of animals, you would have called it flesh. Open the pages of one of our earliest collections of recipes and you’ll find dishes with names like “Tartes of Flessh.” Just imagine a menu today featuring items such as “Fleshloaf and mashed potatoes” or “Spaghetti and fleshballs.” Obviously we react to the word flesh very viscerally. But it was not always so.
In German to this day meat is still Fleisch and a carnivore is, logically, a Fleischfressender—literally, an eater of flesh. But as the centuries have rolled by, we English speakers have become more squeamish than our Teutonic relatives. Even the most staunchly carnivorous carnivore wouldn’t relish being referred to as an eater of flesh—a designation we reserve for the likes of Hannibal Lecter. We prefer to distinguish between our flesh (which we don’t eat) and our meat (which we do). Which is a further reason the June 1978 cover of Hustler Magazine created such an uproar. It featured a woman’s naked body descending into a meat grinder, with only her lower torso and legs still unmangled; emerging from the other end of the grinder was a mass of ground meat. Her living, breathing flesh had turned into hamburger, thus literalizing the pornographic metaphor of the “meat market.” 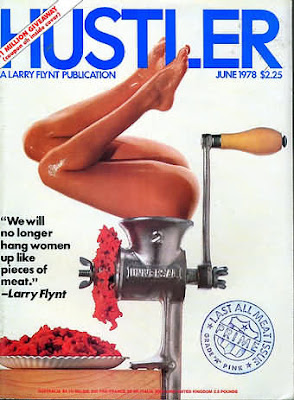 When it comes to meat, we English speakers seem to have a hard time confronting the fleshy reality of what we eat and so we resort to many different strategies to avoid stating the obvious. Euphemisms come in handy when you don’t want to acknowledge biting into a pancreas or a thymus gland. Sweetbreads sound so much nicer, and although honeycomb tripe may not particularly whet your appetite, it nonetheless does a better job than reticulum, or the lining of a cow’s second stomach.
Other languages are also called upon for a bit of elegant obfuscation. There’s a world of difference between a pâté de fois gras and fatty liver paste, or between osso buco and hollow bones. French and Italian, in particular, have an almost magical ability to transform the humble into the elegant and to convert the less-than-appealing into the more-than-tantalizing.
But you don’t have to turn to gourmet fare to see such linguistic double-talk at work when it comes to the matter of edible animal tissue. Why is it that we have different names for the cuts of meat that appear on our dinner plates and for the animals from which those cuts were, well, cut? We eat beef but it’s a cow our sirloins and porterhouse steaks came from; and I’ve never heard of an animal named pork or veal.  Lamb, of course, is an exception but I can remember being taken aback when I first moved to New England and saw “lamb legs” featured in the supermarket’s weekly circular. Somehow the more familiar “leg of lamb” had never evoked the mental image of a little lamb prancing about on a meadow as “lamb legs” did so immediately and so powerfully.
Obviously we feel the urge to rename the animals we eat in a way we don’t when it comes to fruits and vegetables—or even when it comes to fish, which somehow seem to occupy a middle-ground between the animal and vegetable kingdoms. I know plenty of vegetarians who are fine eating fish and even observant Jews who strictly separate milk from meat find it permissible to eat creamed herring or bagels with lox and cream cheese.
Why we feel differently about eating meat isn’t difficult to figure out. In order to enjoy a steak or a chop, a life had to be taken and blood had to be shed. Even those of us who are OK with this can’t deny that many people have a hard time justifying such killing. It was a vegetarian diet, after all, that God intended for Adam and Eve in Eden, which is why he instructed them to eat “every green herb for meat.” It was only after he was forced to acknowledge that people were inherently aggressive that he allowed them to kill and eat meat. After angrily flooding the earth and destroying all living beings except for Noah, his family, and the animals brought into the ark, God acknowledged that the time had come to revise his original dietary allowances to include meat: “Every moving thing that liveth shall be meat for you.” The conclusion is easy to figure out: had people turned out to be what God had hoped for, they’d have remained vegetarian.
Even those of us who dismiss the Bible as a collection of primitive myths nevertheless maintain something of its ambivalence about meat. We want it, but we don’t want to think too closely about where it came from or what it took to get it to our plates. And so, perverse creatures that we are, we rename it, as though to call it by a another name were somehow to make it less suspect, less visceral, less fleshy.
Don’t believe me? Just try serving your family a dinner of roast flesh, calf cutlets, or pig chops for dinner and see how quickly they ask for seconds.
Posted by Ina Lipkowitz at 10:39 AM