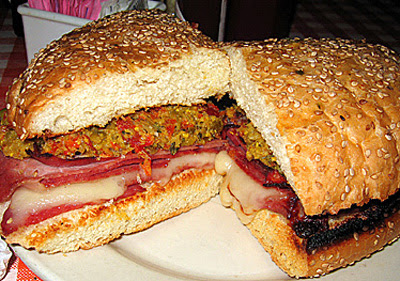 Is it that I’m in a bready state of mind lately (recent posts have been on bread and French toast) or is it that I just got back from a long weekend in New Orleans where you have to treat yourself to a muffuletta or two (not to mention a po’boy, some beignets and chicory coffee, fried crawdaddies, oysters on the half shell, gumbo with Andouille sausage, jambalaya, blackened just-about-anything, bread pudding with whiskey sauce, three-layered coconut cake, at least a couple of hurricanes and sazeracs—and all that in one long weeked!).
When I managed to stop eating (which wasn’t until I was sitting on the plane heading home), I got to thinking. The muffuletta in particular got me wondering about sandwiches and their names. Is there any other food you can think of that’s got so many different names? There are club sandwiches, Reubens, Monte Cristos, and Dagwoods. There are Italians and Cubans and there are the ones known familiarly by abbreviations (BLT’s and PB & J’s), not to mention the dozens that are named more straightforwardly after their main ingredients. 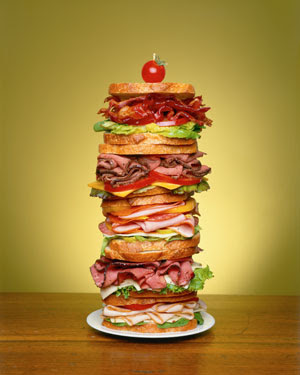 Still, a club sandwich is a club sandwich is a club sandwich, whether you’re ordering it in New York or California. Most sliced bread sandwiches are pretty consistent in terminology. You can walk into a diner or deli anywhere in the country and order a BLT or a tuna sandwich. But enter the wonderful world of sandwiches made on torpedo-shaped Italian or French rolls, and you better know the custom of the country or you’re likely to go hungry. Oh, I suppose you could cheat and call them all subs, but it’s a lot more fun to master the local lingo. When in Rome, as they say. 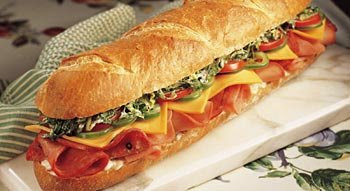 Thus, for the record. If you’re in New York, make your life easy and order a hero sandwich, but when you’re in Philadelphia, ask for a hoagie. In New England, they’re known as grinders. States like New Jersey have it tough, because you have to know whether you’re in the north, which follows NY usage, or the south, which is more akin to Philly. Connecticut has a similarly split sandwich personality, with half the state eating heroes and the other grinders. Oh what the Earl of Sandwich wrought when he slapped a few pieces of meat between slices of bread so as not to have to leave the gambling table!
But there’s no place other than New Orleans where you can get a muffuletta (which seems to be spelled in as many different ways as there are places that make them).
So what is a muffuletta, for those of you who’ve never tasted New Orleans’ claim to sandwich fame? I’ll tell you. You cut a round loaf of sesame bread in half horizontally, pull out some of the inside of the bread so as to make as much room as possible for the filling and then layer one of the bread shells with thinly sliced Italian cold cuts like genoa salami, mortadella, capocola salami, ham, and a few slices of provolone cheese. Slather the other bread shell with the olive salad and pickled vegetables without which a muffuletta is just any other Italian sandwich. The goal here is to pack in as much filling as possible. Press the two halves together and weight it while you wait for it for an hour or so. Some people heat it to let the cheese melt a bit, but most places don’t. Generally speaking, muffulettas are so big that they’re cut not just in halves, but in quarters. 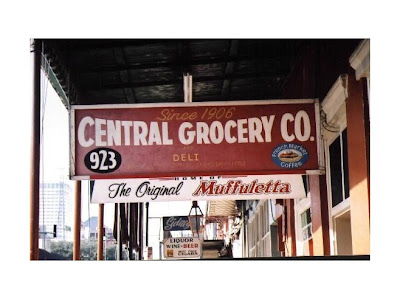 Here, then, is some food for thought to occupy you while you’re waiting for your muffuletta to . . . well . . . weight. From what I can gather, the New Orleans specialty gets its name from the round sesame bread it’s been made on since 1906 when an Italian immigrant named Lupo Salvatore who owned a shop called Central Grocery on Decatur Street had the bright idea to put the cold cuts and olive salad inside the bread (rather than serving them alongside, as had been done for centuries in the old country), thus making it easier for the Sicilian farmers to eat their lunch while sitting on crates and barrels. A soft round bread was easier to stuff and bite into than long crusty loaves and the soft round bread that was perfect for the job was known in Italian as a muffuletta, which is the diminutive of muffola, or muff. Believe it or not, our English muffin is a related word, although it’s tough to see much similarity between a corn muffin and the behemoth of a sandwich I managed to eat last weekend. 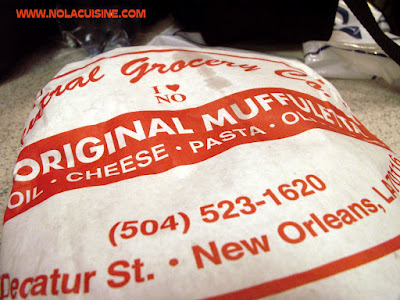 To be honest, it was half a muffuletta I ate, not the whole thing. I don’t think I could have. It’s curious, isn’t it, that such a gargantuan sandwich should have such a diminutive little name? Makes me think of jumbo shrimp. Which, by the way, is another thing I ate way too much of last weekend.
Posted by Ina Lipkowitz at 3:38 PM