Leeks: The Unsung Heroes of the Onion Family 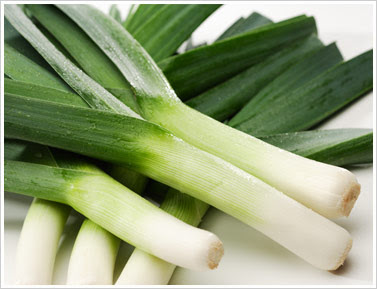 Every year for the past few years I buy the same kitchen calendar for myself (it's the Eating Well Calendar if you want to know, and you can still order one for yourself if you haven't yet committed to a calendar for 2012). It’s got such beautiful pictures of fruits and vegetables that I don’t have the heart to throw the calendars out by the time the end of December rolls around. In fact I’ve got a collection of old ones upstairs, dating back, I think, to 2004 or 2005. I suppose I have it in the back of my mind that one fine day I’ll get around to framing a few of my favorite images to decorate the walls of my kitchen. But how to decide between the apples and beets and figs and cabbages?
But now it’s March and I just turned a new page on my calendar (it’s a little game I play with myself, refusing to peek ahead of time) to find . . . an onion. Hmmm. Don’t get me wrong. It’s a really good close-up of the vegetable that is, arguably, the one we cook with most of all. A basic kitchen staple. A veritable work-horse. Old Reliable. I bet that if you’ve cooked dinner at all within the last week, an onion figured in the preparation. I couldn’t tell you if it was a yellow, white, or red one—or whether it was a Bermuda, Vidalia, Walla-Walla, Maui, or maybe a pretty little Cipollini or Pearl. But I’m willing to wager that if you cooked this week, at some point your knife made contact with an onion. 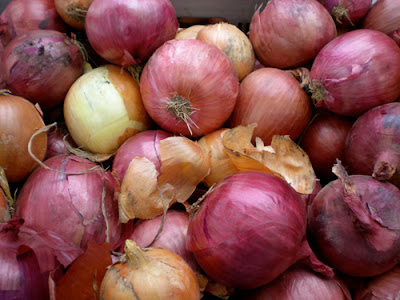 All of which is simply another way of saying something that Julia Child—aka The French Chef—once commented on far more memorably: “It’s hard to imagine civilization without onions.”
So here’s my question and here’s what made me pause when I turned the page on my calendar to discover an onion. What’s become of that other member of the allium family that I, for one, turn to time and time again during these long dark wintry months? No, not the scallion and no, not the shallot. The leek. What's become of the leek? Why haven’t I ever seen a glossy shot of a leek on my calendar? When was the last time you chopped a leek?
There always seems to be a reason to avoid the leek. “A what?," I've heard some people say. “Looks like a scallion on steroids.” “What’s it taste like?” “They’re so dirty.” “What a pain to rinse out all the grit.” “What do I do with it?” Supermarkets even feel the need to explain what they are and sometimes post designed-to-be-helpful signs: "Mild, with an onion-like flavor."
But think of this. Time was (granted, a long long time ago) when the leek was so far from being the underdog of the onion family that other oniony vegetables were named after it. Instead of “spring onions” and “pearl onions” and “green onions,” there used to be plants called “cropleac,” “holleac,” and “bradeleac.” No one’s quite sure what the names referred to all those years ago, but the “leac” at the end makes one thing very clear: whatever they were, they were treated as a type of leek.
We’ve still got one such word with us. Garlic. Bet you didn’t know that garlic gets its second syllable—the lic—from the leek. The gar meant something like “spear,” which makes sense if you’ve ever seen a head of garlic with its stem still attached. 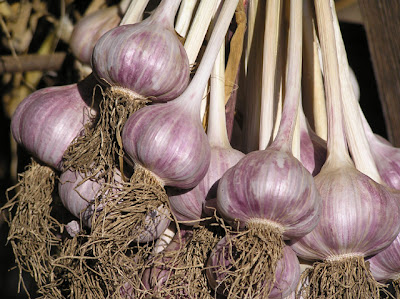 So why is it that today the leek is considered to be a member of the onion family whereas it used to be that the onion was considered part of the leek family? What was responsible for what the late great food writer Jane Grigson once referred to as “the social collapse of this ancient vegetable”?
Now there are all sorts of practical reasons. Onions have papery skins that allow you to store them longer, not to mention keeping out a lot of the dirt and grit. But I wonder whether there’s also something about the names. Shakespeare knew a thing or two about how to use his words and he made good sport out of the fact that “to eat a leek” meant “to humiliate.” “I will make him eat some part of my leek, or I will peat his pate four days,” declares the leek-eating Welsh Ffluellen in Henry V.
Somehow the monosyllabic leek just doesn’t sound as musical or as appetizing as onion. Linger over the word. Say it slowly. On-yun. It flows trippingly off the tongue, doesn’t it? Just another example of something I have found to be true, if not all the time, at least most of the time. We like French-sounding words better than German-sounding ones and our linguistic preferences seem to coincide with our culinary ones. Which sounds better to you? L’oignon or der lauch? And which do you reach for more often?
Posted by Ina Lipkowitz at 5:08 PM