A Mango a Day 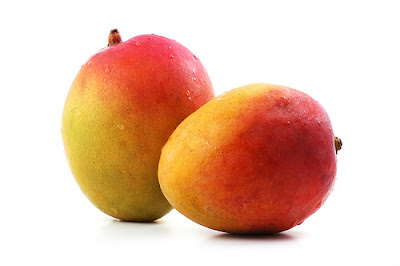 There’s little that can be said against the locovore movement except this: I love mangoes and they don’t grow in Massachusetts where I live. Much as I’d like to say that I eat only those fruits and vegetables that grow close to home, the truth is that I buy four or five mangoes at the supermarket every week—yes, every week. You see, the thing is that I crave them on an almost daily basis. My standard lunch is based around a mango—a whole mango—and as far as I’m concerned, it’s the best lunch I know. You peel a perfectly ripe mango that feels pleasingly heavy in the palm of your hand, cube the pinkish-orange-gold flesh that smells like nothing else you’re ever likely to smell, and eat it all by yourself with some plain yogurt and home-made granola sprinkled on top. Sort of sweet, sort of tart, sort of perfumey all at the same time.
It would have been better for the locovore movement if Dr. John Fryer had never traveled to India and Persia for the British East India Company in the 17th century. He returned home to England and wrote of the mangoes he’d eaten that “when ripe, the Apples of the Hesperides are but Fables to them; for Taste, the Nectarine, Peach and Apricot fall short.” Who wouldn’t go to great lengths to taste such a fruit, cultivated in India since 2000 BC at least when it was called man-kay (or man-gay) in Tamil, literally, the “fruit of the mango tree”? By Dr. Fryer’s time, the mango was so revered in India that it had become a royal status symbol. The Moghul ruler Akbar had an orchard of 100,000 mango trees planted in Darbhanga and for centuries only rajas and nawabs were permitted to cultivate mango orchards. 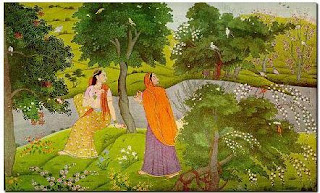 Thankfully today you don’t have to be a raja or nawab to grow mangoes—nor to eat them. Today, they’re almost always on special at my local Stop & Shop at four for $5.00. As available and prosaic as they’ve become, however, they never shed their aura of exoticism. Even when heaped up in bins at the supermarket, they still bring to mind the Vedic myth of Surya Bai, daughter of the sun, who was saved from an evil sorceress by being transformed into a golden lotus. When the furious sorceress burned the lotus, a mango tree sprang up from its ashes and when a ripe fruit fell to the ground, Surya Bai stepped out to be reunited with the husband who’d thought to have lost her forever. Clearly I’m not the only one who loves a good mango. 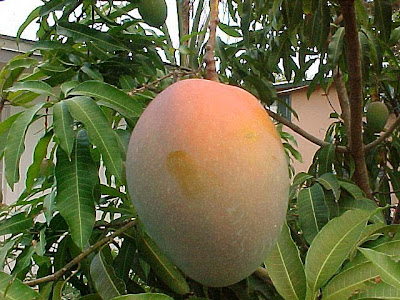 It wasn’t an evil sorceress, though, but Portuguese colonizers who brought the mango from India to Africa from where it sailed to Brazil and the West Indies, and finally, in the 19th century, to Hawaii, Florida, and Mexico, where many of the mangoes I eat for lunch today were grown.
Which brings me to my last point. Much as I love mangoes, I don’t generally like things made with mangoes—dessert things, that is. I love unripe, or green, mango salads (very popular in India and throughout Southeast Asia) and on summer evenings I sometimes make tandoori-ish chicken which I serve with basmati rice into which I’ve stirred cubed mango, red onion, cilantro, and amchoor (ground dried mango powder). But mango desserts are usually way too sweet for me. Except for one. 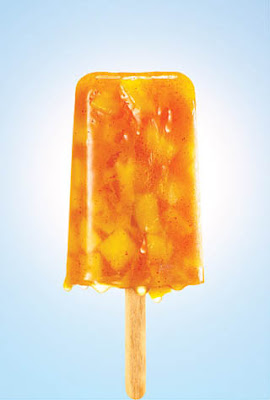 Paletas de mango con chile. For those of you who don’t know what a paleta is, it’s a Latin American ice pop and let me tell you that if your idea of an ice pop is grape or cherry, you’re in for a treat. Think guava, tamarind, papaya, coconut, cucumber, and my favorite, mango con chile. Perfect as it already is, the sweet-tartness of the mango is made even more hauntingly redolent by the pungency of the lime and the slight smokiness of the ancho chile. Try one and you'll be likely to agree that a strictly locovore diet might have its limitations.
Paletas de Mango con Chile
1 cup mango nectar
¼ sugar
2 tsp fresh lime juice
1 tsp ancho chile powder
1 large mango, peeled, seeded, and cut in small cubes
Heat the first three ingredients and stir until the sugar has dissolved. Stir in the chile and mango and pour into ice pop molds. Freeze until solid.
Posted by Ina Lipkowitz at 10:01 AM