Who put the "French" in French toast? 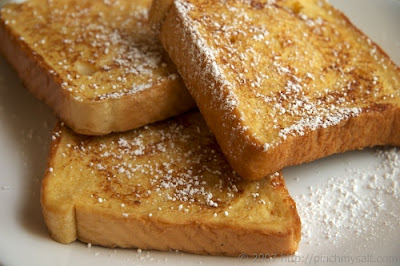 An embarrassing moment: I was being interviewed for a radio show this morning and the host asked if I’d like to comment on the name of whatever it was I had for breakfast. I drew a blank. What could I say about Special K? What’s the K for anyway? Kellogg probably. But where could I go with that?
Here’s what I should have done (oh, those should-have-dones—don’t they just drive you crazy?). I should have pretended I’d made French toast. Then I’d have had something interesting to talk about.
I could have said that there’s a recipe that’s almost 2,000 years old for a dish that we’d recognize as French toast. It’s in a Roman cookery book and it tells us to soak bread in milk and beaten eggs, and then to fry it up in oil. They didn’t use butter in ancient Rome and they certainly didn’t know from maple syrup back then—hence the oil and honey in the recipe. But it’s definitely French toast nonetheless. 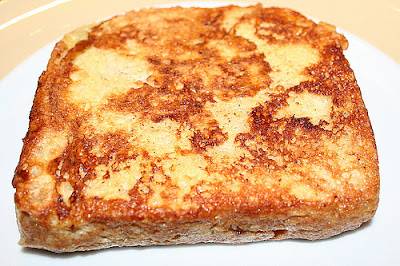 So here’s the question I would have asked. If the dish dates back to the Roman Empire, why do we call it French toast instead of Roman toast?
I would probably have gotten around to noting that more or less anyone who’s got bread has some version of French toast. After all, if you’ve got bread, sooner or later you’re going to have stale bread and what could be better than to let that stale bread soak something up? In India, they dunk their bread into a mixture of eggs, milk, salt, green chili, and onion, and then deep fry it in butter or oil; the resulting dish is called Bombay or Masala Toast. In Spain, torrijas are made by soaking thick slices of bread in milk or wine, dipping them in egg, frying them, and then serving them with spiced honey. In Germany, Arme Ritter, “Poor Knights,” are made from old bread that’s been soaked in egg, coated with bread crumbs, fried in butter, and served with sautéed apple slices or plum jam. When the bread is soaked in wine instead of milk, the dish is called Versoffene Jungfern oder Ritter, “Drunken Maidens or Knights.”
I could have talked about a similarly alcoholic version in England that's sometimes known as “Poor Knights of Windsor." Its ancestor, back in the fourteenth century, was called Paynfoundew, which is French for Melted Bread. It was a pretty elaborate concoction, as things tended to be in late medieval times. You'd soak some stale bread in red wine, grind it to a paste with raisins and honey, bind it up with egg whites, boil it until firm, and then slice it, sprinkle it with sugar and sweet spices, and brown in a hot oven. Back then, such an expensive and time-consuming dish was bound to have a French name.
As the centuries went by and the dish evolved, it began to look less like a pudding and more like what we'd recognize today. It came to be known as Payn Purdew, French for Lost Bread—the “lost” alluding either to the bread’s getting lost in the beaten eggs or, maybe, to the leftover or “lost” bits of bread that went into the recipe.
Finally in the 1660 cookbook  The Accomplisht Cook, or, The Art & Mystery of Cookery, Robert May referred to the dish by the name we use today—French toast—maybe because the bread specified for the dish was the French wheat loaf known as a manchet.
But what I would have wanted to emphasize is that whether it was Paynfoundew, Paynpurdew, or French toast, the name of the dish has always had something French about it—with one exception, which, I’m proud to say, hails from my neck of the woods: New England. When Mary J. Lincoln published her 1871 The Boston Cook Book, she included a recipe she titled “Egg Toast, or Bread Sautéd,” to which she added a note of explanation: “It is called French, Spanish, German, and Nun’s Toast; but Egg Toast seems to best indicate the character of the dish.”
So why don’t we serve Egg Toast for breakfast, I would have asked? And what makes me so sure that German Toast or Nun’s Toast wouldn’t go over too big?

My conclusion would probably have come around to the fact that we English speakers tend to think anything even remotely French sounds better than anything English—and certainly better than anything German. Even when the House of Representatives, objecting to France’s opposition to the United States’ involvement in Iraq, insisted on removing the “French” from French toast on the menus of their cafeterias, they never considered calling it “German Toast"—not because Chancellor Schroeder had similarly opposed the US policy, but because they knew that the restaurants wouldn’t be too happy if breakfasting politicians all of a sudden refused to order the exact same dish they’d known and loved for years when it suddenly appeared on the menus of the nation’s capital with a Teutonic name.

That's what I would have said if I'd been quicker on my feet.
Posted by Ina Lipkowitz at 2:16 PM