Fruit of the Fall 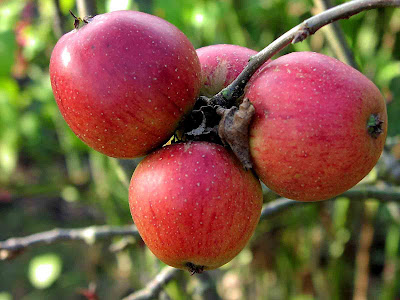 Now that summer’s officially over (well, not officially, but Labor Day has come and gone, the kids are back in school, and the hazy, hot, and humid days are nearing their end), I think apples. I’m lucky to live in a part of the country that's lush with apple orchards and every September my family comes home with bushels of Macouns, McIntoshes, Empires, and Spencers (our personal favorites). But while we're out there, climbing to the highest branches and reaching for the biggest, plumpest, juiciest apples of all, my mind starts wandering, as it's wont to do. Of course I think about all the things I'm going to do with the apples once I get home: apple pie, apple sauce, apple chutney, and the layered sliced-apple cake that's gone before you know it.
As I perch there on a perfectly comfortable branch watching everyone else stretch and strain, I start to wonder too about our national obsession with the fruit. There’s Johnny Appleseed, of course, and there’s my home town, New York, the Big Apple. The computer I’m typing on is called a Mac, and who doesn’t know that an apple a day keeps the doctor away? But the more I think, the more I realize that we’re hardly alone in our obsession with the apple. Apparently people have always been captivated by the fruit of the fall. But is that fall as in the season or fall as in sin? 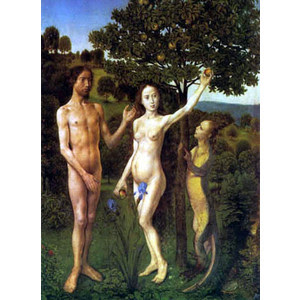 In fact, although I have neither polls nor statistics to back me up, I’m confident that, if I were to ask you what fruit it was that Adam and Eve ate in the Garden of Eden, nine out of ten of you would answer it was an apple. But here’s the curious truth: there’s no apple in the story. Not a single one. Eve’s exact words before she gave in to the wily serpent were, “‘We may eat of the fruit of the trees in the garden; but God said, ‘You shall not eat of the fruit of the tree that is in the middle of the garden, nor shall you touch it, or you shall die.’” All things considered, it seems far more likely that the forbidden fruit would have been a fig, pomegranate, quince, or some other species native to Mesopotamia. Apples, on the other hand, are indigenous to the region of modern-day Kazakhstan. Eve probably wouldn’t have recognized an apple if one hit her on the head.
And yet, for no obvious reason whatsoever, millions of people the world over have automatically assumed the forbidden fruit of Eden to have been an apple. Why?
On the one hand, the assumption is easy to account for. When people think fruit, they all but invariably think of apples, which is why so many exotic new species have historically been considered a type of apple. What do pineapples have to do with apples? And why else would a French potato be a pomme de terre (literally “earth apple”) or a German orange an Apfelsine (literally, “Chinese apple”)? Perhaps the same habit of identifying all unknown fruits and vegetables as a type of apple is responsible for our faulty assumption.
There’s another possibility—one that involves similar-sounding words in Latin, the language into which the Bible was translated. When the word malum is pronounced with a long ā, it means apple; but when the vowel’s short, it means evil. It’s from the short-vowelled malum that we get so many of our nastiest English words, like malice, malevolent, malady, and malignant. Suddenly we’re put in mind of all those myths and stories in which the apple’s apparent sweetness is used to tempt, seduce, and destroy. It’s no accident that it was an apple bearing the words “For the Fairest” that started the Trojan War of Greek mythology, or that it was an irresistible yet poisonous apple the vainly jealous Queen used to tempt her too-beautiful stepdaughter Snow White. The biblical story is by no means the only one in which the pleasure that the fruit promises comes with a hefty price tag. The Fall of Man, the fall of Troy, and the fall of Snow White can all be pinned on the apple.
But there’s still more to the story. Eden’s forbidden fruit was identified as an apple at a specific moment in history and for a specific reason: in the early sixth century in order to convert northern pagans to Christianity which, as we all know, esteemed the grape rather than the apple. It was a poet living in what was then called Gaul who first identified the precise fruit it was that grew in the middle of the garden. “She gave in to his treachery and, herself consumed, bit into the apple.” The work was The Fall of Man by the poet Alcimus Ecdicius Avitus. Avitus wasn’t only a poet, however; he was also an archbishop famous for his tireless battle against the heresies that were threatening the Church so far up north. It was his job to convert both the Celtic and Germanic pagans, and he had his work cut out for him. 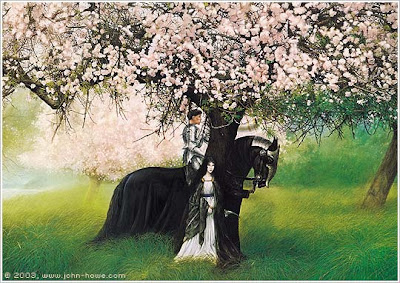 The Celts’ longed-for paradise was the western isle known as Avalon, which means “The Place of Apples.” The wizard Merlin used to deliver his prophecies while standing in an apple orchard. In Germanic legends as well, apples were the source of immortality and fertility. The gods remained immortal only so long as they ate the apples of the goddess Idun, and when the Norse god Odin’s grandson prayed for a son, the sign that his wish was about to be fulfilled was an apple dropped into his lap. 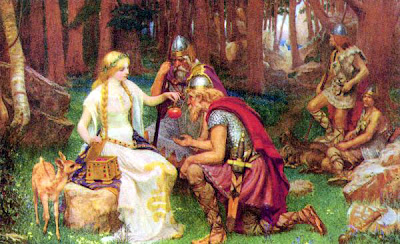 How better to convert those apple-loving pagans than by convincing them that their sacred fruit didn’t confer the immortality they believed it to, but, quite on the contrary, that it lured them with false, dangerous, and sinful knowledge? The strategy worked. Ever since Avitus’ epic, it’s been the apple that has tempted Eve and deprived her and her unwitting spouse—not to mention all the rest of us—of eternal life in paradise.
How do you like them apples?
(Adapted from my recent Words to Eat By: Five Foods and the Culinary History of the English Language)
Posted by Ina Lipkowitz at 9:44 AM