On Pudding, Bread or Otherwise 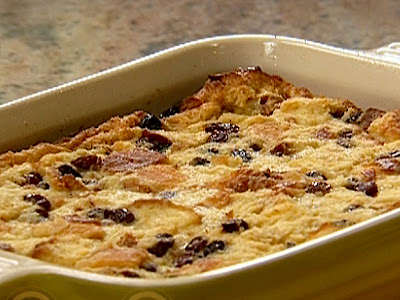 Corny as it may sound, every September my daughter invites her friends over for a tea party as a sort of welcome back to school. Don’t get me wrong: this is no dress-up party for five-year-olds in pink tulle tutus and paste pearls. My daughter’s in high school and this is an honest-to-goodness English afternoon tea, complete with pots of Darjeeling and Earl Grey, cucumber sandwiches, currant scones (with clotted cream and raspberry preserves), leek and cheddar tartlets—all arranged on a traditional three-tiered stand—with a lovely lemon fool (that’s English for mousse) adorned with berries and mint sprigs to complete the occasion.
Frugal by nature, though, I have a bone to pick with those dainty little tea sandwiches. It’s got nothing to do with the way they taste: I love the lemon-dill buttered cucumber sandwiches, the sea salt-sprinkled radish ones, and the garden-fresh chive and cream cheese on wheat. It’s the matter of their crustlessness that gets me. I acknowledge that tea sandwiches just don’t look proper with their crusts still on; nonetheless, their nakedness bothers me. I’ve never been one to cut the crusts off my sandwiches, and so as I gaze upon the heap of discarded crusts that grows ever higher as we assemble plates of carefully constructed triangles, I know with a certainty what I’ll be doing tomorrow. Making bread pudding. Although I’ve never been the sort of woman who’d buy an outfit to match a scarf, truth be told, I'm precisely the sort of woman who’d cut the crusts of tea sandwiches for the sole purpose of putting those cast-offs to good use.
What could be easier, after all, than drying out those crusts on a cookie sheet, and then soaking them in some milk (and cream, if you’ve still got some left over from the tea party), then adding eggs, sugar, vanilla, and, depending on your taste, raisins, cinnamon, and/or nutmeg, before, finally, letting the magic of the oven transform the soppy glop into the essence of all that’s good and right about old-fashioned thrifty home kitchens?
As much as I love that it’s made of cast-offs and staple ingredients I’ve always got on hand—and, of course, as much as I love how it tastes—I also love that odd little word pudding, a name that strikes me as at once homey and majestic, equal parts ugly duckling and majestic swan. There’s no word quite like it, is there? 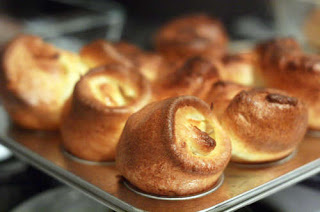 And as I chant the word, mantra-like, in my mind, all of a sudden I stop. Wait a minute. What about Yorkshire Pudding, which is really more popover than dessert? And what about black pudding, which is just another way of saying blood sausage (tastier than it sounds for those who haven’t tried it)? What qualifies them as puddings? What do they have in common with each other, much less with bread pudding, rice pudding, chocolate pudding, and figgy pudding (which we tend to sing about at Christmastime more than we eat)? And why, now that I’m on a roll, do the Brits call their desserts puddings? In one of my favorite cookbooks, Jane Grigson’s English Food, the chapter titled “Puddings” includes recipes for apple pie, cherry tarts, pears in syrup, and brown bread ice cream—each and every one a winner, but not a single one a pudding in my sense of the word.
What gives? Is there, I wonder, a lowest common denominator, a non-negotiable, a sine qua non when it comes to puddings—a Platonic ideal of puddinghood? 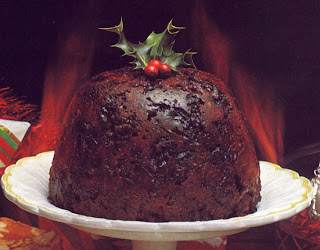 To the books I go. It turns out that blood pudding and the liver pudding (sometimes called "scrapple") beloved by southerners are closer to the original meaning of pudding than the custardy concoctions we understand the word to mean today. According to my etymological dictionary, in the thirteenth century, pudding referred to “a kind of sausage, the stomach or one of the entrails of a pig, sheep, etc., stuffed with minced meat, suet, seasoning, boiled and kept till needed.” Sort of like a traditional plum pudding, when you think about it. Perhaps, I read on, the word derived from the West Germanic pud, which meant “to swell” (as in “pudgy”), or, perhaps it was adapted from the Old French boudin, “sausage,” which came from the Latin botellus, also “sausage” (and from which we get our “botulism”—an unfortunate connection, but what can you do?). In a cookery book dating to 1430, there’s a recipe for a Puddyng of purpaysse (that’s porpoise to us) which is sort of a pudding and sort of a sausage at the same time. It's also very likely to make you glad you didn’t live back then.
Puddyng of purpaysse: Take the Blode of him, and the grece of hym self, & Ote-mele, & Salt, & Pepir, & Gyngere, & melle these to-gederys wel, & than putte this in the Gutte of the purpays, & than lat it seethe esyli, & not hard, a good whylys; & than take hym uppe, & broyle hym a lytil, & than serve forth.
[Porpoise Pudding: Take the blood of him and the grease of him, and oatmeal and salt and pepper and ginger, and mix these together well, and then put this in the porpoise’s gut and then let it seethe easily and not hard for a good while, and then take him out and broil him a little and then serve it forth.]
Oatmeal-thickened spiced porpoise blood seethed inside the gut—how good does that sound? With a little analogical reasoning, though, the connection becomes clear. What sausage is to casing, puddings are to the bags in which they were traditionally boiled: thus Porpoise Pudding (not Porpoise Sausage), not to mention all the hundreds of English puddings that combined some sort of meat with a grain, suet, and eggs, and were then either boiled, steamed, or baked. As time went by, casings and bags were replaced by baking dishes, tins and molds, and thus it was that puddings came to include both savory and sweet concoctions, whether they were immersed in liquid or baked in an oven. 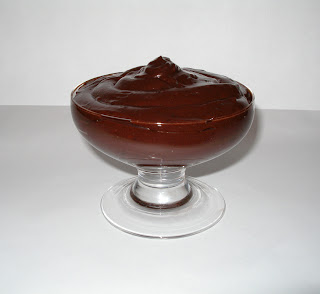 It was George Bernard Shaw who once quipped that the United States and Britain are two countries separated by a common language. What they call pudding, we call dessert. What we call pudding, they call custard, a sweet creamy dessert thickened with eggs, flour, tapioca, cornstarch, gelatin, rice, or—to get to the point at last—bread. In fact, in the case of my bread pudding—which is, when all is said and done, more cakey than puddingy—my guess is that at some point in our history a frugal housewife had more bread on her hands than she knew what to do with and so shifted her proportions about and bequeathed to the world the first avatar of the dessert I, equally frugal, have just now taken out of my own oven. Or so I like to imagine . . .
Posted by Ina Lipkowitz at 11:01 AM