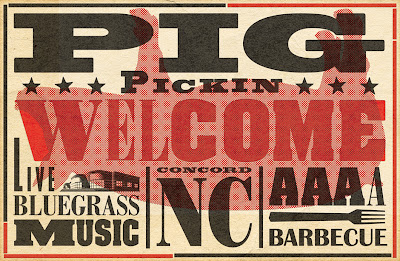 “And we hope y’all can join us for our Annual-Welcome-to-North-Carolina-Labor Day-Pig-Pickin’.” A pig-pickin’? Were they kidding? What was a pig-pickin’ in the first place and, in the second place, no thank you. Visions of ravenous hyenas scavenging on wildebeest carcasses flashed through my mind. Needless to say, I was no hyena roaming about on the vast plains of the Serengeti. I was from New York City, the land of Zabar’s, H & H bagels, Korean greengrocers, and match-box-sized kitchens. Where dinner was likely to be cold sesame noodles, Ta-Chien chicken, and broccoli in garlic sauce that arrived at your apartment door in little white cardboard boxes with metal handles, or, when you decided to eat out (which you did as often as possible, especially on hot summer nights), sturdy white oversized plates of insalata caprese and risotto con gli asparagi to be lingered over with a bottle of Pinot Grigio or a Vernaccia in the colorfully lit back garden of an Italian ristorante in the West Village. If I ever ate pig at all—and to be honest, I ate it as little as possible—I never thought of it as pig, but as pork—or better still, as prosciutto, pancetta, mortadella, or one of the many other wonderful cured or smoked Italian cold cuts that go by the collective name of salume. They don’t sell pig loins, pig tenderloins, and pig chops in the meat section of the supermarket after all. Pigs are the short-legged, stout-bodied, even-toed ungulates that waddle around in sties, rooting their muddy snouts into garbage-filled troughs and snorting with delight. Pork, on the other hand, is what you eat. Or ham. But even then, it’s all too easy to think of your own pulled hamstring and once you’ve realized that it’s not only pigs who have hams—how else could you have a hamstring, after all?—you’re no longer in the world of the edible, but of the living. 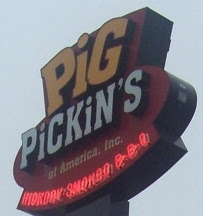 But back to the pig-pickin’. There I was, a born and bred New Yorker about to move to North Carolina for a year because my husband had won an academic fellowship that carried with it a residency requirement. The pickin’ was the brain child of a Southern gentleman by the name of Corbett Capps, an engineer by trade who was in charge of the building in which all the serious academic research was to be conducted, and a pit master by avocation who regularly drove up to points north, pig and all necessary accoutrements in the back of his pick-up truck, in his tireless quest to introduce curious Yankees to the gustatory pleasures of the Tar Heel State. “Put a little south in yo’ mouth” might well have been the clarion call of Corbett Capps’ mission to spread the taste of southern barbecue to those not lucky enough to have been born south of the Mason-Dixon line. Like me, for instance.
Now, my husband might have been most concerned with finishing the book he was working on (he did), but I, not as high-minded, was more interested in the food of the region—and what I very quickly discovered was that Eastern North Carolina’s claim to culinary fame is, hands down, barbecue. Not what we Northerners call barbecue, which is dismissively shrugged off down there as no more than grilled hamburgers and hotdogs, and not what they call barbecue in Texas, which tends to be beef ribs or beef brisket slathered in a spicy tomato-based sauce, but real barbecue, which, in North Carolina, can only mean pig. More specifically, a pig somewhere between 60 and 100 pounds, beheaded, betailed, and befooted, splayed open and gutted, cooked over hickory wood for anywhere from eight to eighteen hours, mopped from time to time with a hot red peppery vinegar, and served with cole slaw and hush puppies, those deep-fried little corn bread fritters that, rumor has it, were tossed to the hungry dogs yapping around the camp fire in order to keep them quiet, hence their name. 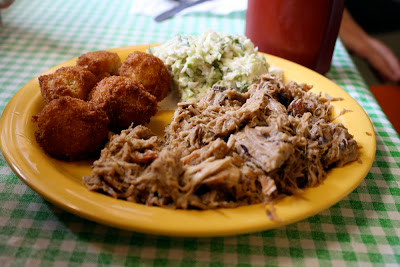 A splayed-open and gutted pig may be a thing of beauty to a North Carolinian, but it wasn’t to me. What I saw on that sticky September late afternoon was a big dead animal sprawled belly up across a huge metal barrel drum. What I smelled, however, wasn’t bad. In fact, it smelled good. Very good. So, determined not to be the snobby New Yorker that I so clearly was, I steeled myself to do just as the natives did. I picked. With my fork, not my fingers. From the middle of the carcass—avoiding those areas that only a day or two before had abutted the head, feet, or tail, as though the degree of unadulterated pigginess somehow mysteriously increased the farther one traveled from the relatively innocuous torso, if one can speak of a pig’s torso, that is. With not the slightest bit of resistance whatsoever, the meat came off in shreds and chunks, and the instant I brought those shreds and chunks to my lips, I saw the light, just as surely as Paul did on the road to Damascus almost two millennia ago. I was instantly and irrevocably converted.  Barbecue suddenly made complete and total sense to me. This was, hands down, the best meat I’d ever tasted in my entire life. Sweet, salty, succulent, with tender fleshy bits alternating with burnt crispy ones. I couldn’t stop picking and eating, and I’m sure that I made quite a pig of myself on that hot September day in the woods, with banjos playing, sweet tea flowing, banana pudding waiting for dessert, and more y’alls and darlin’s than I’d ever heard.
The whole business of pig-pickin’s and porcine nomenclature got me thinking. What was I reacting to more viscerally as I stood there in my New York City apartment, holding the phone to my ear and listening to that oh-so-hospitable Southern voice invite me to eat a pig? The mental image of a big dead animal splayed wide open or the no-holds barred name pig-pickin’? Would I have had the same immediate stomach-clenching reaction if that drawling voice on the telephone had invited me to a Labor Day pork roast? Perhaps, I thought, it was more the name than the thing that sent such a spasm of nausea straight through me. If it had been a pork roast I’d been invited to, I might have had a much different reaction. Pork, after all, is not all that different from the French porque or roast from rôtir, and we all know how we love it when our foods have French names. But a pig-pickin’? Nothing French about those words. Picg was what medieval Germanic tribes would have called baby swine and pician was what they would have done to that picgs’ carcass—hardly an image of elegant gourmets sitting down to dine.
It was my reaction to that North Carolina Labor Day pig-pickin’ that first made me aware of the power of food words. In one way or another, we react to them. They make our mouths water, they make our stomachs twinge, and—perhaps most of all—they convey attitude. An attitude that holds a tarte aux pommes to be more refined than an apple pie, a boeuf bourgignon superior to a beef stew, and a pork roast more sophisticated than a pig-pickin.’
The obvious question, of course, is from where our food words derive their power.
(Excerpted and adapted from my Words to Eat By: Five Foods and the Culinary History of the English Language, St. Martin’s Press, 2011)
Posted by Ina Lipkowitz at 10:23 AM